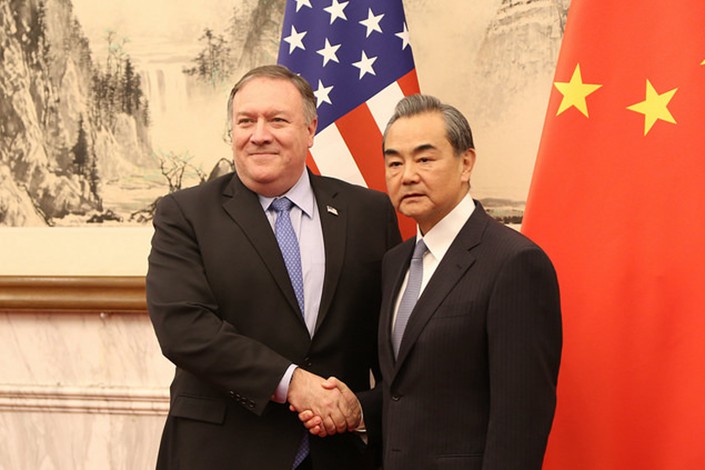 In a joint appearance before a meeting, China’s Foreign Minister Wang Yi called for the U.S. to stop “continuously escalating trade frictions with China” and to cease making “groundless accusations against China’s domestic and foreign policy,” according to a statement published on the Foreign Ministry’s website.

“We urge the U.S. to immediately stop its misguided comments and actions,” Wang said.

In response, Pompeo said the two countries have a "fundamental disagreement." The U.S. has “great concerns about the actions that China has taken,” he said.

But Pompeo added that he looked forward to discussing the matters with Wang as the two countries have an "incredibly important relationship," according to his remarks as published on the website of the U.S. Department of State.

Pompeo said there are many issues on which Washington and Beijing disagree but it is important that both sides listen to each other.

Last week, U.S. Vice President Mike Pence made a series of allegations, including accusing Beijing of attempting to interfere with the November congressional elections.

Earlier, the two countries engaged in tit-for-tat rounds of punitive tariffs on hundreds of billions dollars of products. The past few weeks have also seen the cancellation of planned bilateral trade and security talks and a naval standoff.

A U.S. decision to sell $330 million of military equipment to Taiwan on Sept. 26 and a four-page supplement, sponsored by the official China Daily newspaper, published in Iowa’s Des Moines Register on Sept. 30 further ratcheted up tensions. The supplement included headlines like “Duel undermines benefits of trade” and “Dispute: Fruit of a president’s folly.”

Pompeo's trip to Asia began Saturday in Tokyo, where he met with Prime Minister Shinzo Abe. On Sunday, he met with North Korea’s Kim Jong Un in Pyongyang and South Korean President Moon Jae-in in Seoul.