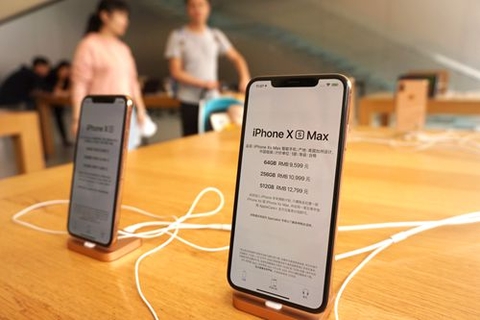 The iPhone XS series has been available for Chinese customers since Sept. 21. Photo: VCG

The annual frenzy for new iPhone models seems to have fizzled this time among Chinese consumers facing list prices of $1,256 to $1,849.

Apple retailers and resellers in China reported lackluster sales of the new iPhone XS and XS Max devices, citing high prices. Some said they are seeing record low sales while others said they have to offer discounts to lure buyers.

Apple launched the latest XS series Sept. 12 in the United States with prices ranging between $999 and $1,449 depending on size and storage capacity. The larger iPhone XS Max, with a price starting at $1,099, is the most expensive model ever offered by Apple.

The new models have been available for Chinese customers since Sept. 21, with official price tags between 8,699 yuan ($1,256) and 12,799 yuan ($1,849). Apple has yet to release sales figures for the new models at official outlets. But several authorized retailers interviewed by Caixin reported disappointing sales.

The slow sales may cast a shadow over Apple’s ambition to win more customers in China, the world’s largest smartphone and internet market. In a rare move, Apple tailored the iPhone XS for Chinese customers by providing slots for dual SIM cards, which identify and authenticate a user’s phone number. Like other manufacturers, Apple tries to standardize designs across markets for production efficiency.

The dual-SIM concession was seen as an effort to expand Apple sales in a hotly competitive market. China is Apple’s largest market after the U.S. and the main production base worldwide for iPhones and iPads. In 2017, Apple generated $45 billion of revenue from Greater China, about 20% of total annual sales.

An executive of a provincial-level iPhone retailer said his company sold 2,200 new XS devices as of Oct. 8, about a 10th of the sales of the iPhone X during the similar period after its release last year. Some retailers have offered discounts for the new model to boost sales, the executive said.

A scalper who buys new models for resale told Caixin that he sold 10 iPhone XS models in three days after the release, compared with more than 100 of the iPhone X last year after the release. Another scalper said he cut prices by 1,000 yuan to sell the new device.

The most popular e-commerce sites, Alibaba’s Tmall and JD.com, didn’t disclose their iPhone XS sales. But electronic retailer Suning’s official outlet on Tmall showed that 9,670 orders had been placed. On JD.com, more than 89,000 comments, often posted by registered shoppers, were shown for the iPhone XS Max models as of Oct. 9.

A mobile market analyst said it is too early to estimate the performance of the iPhone XS series, despite the slow start. The analyst said the high pricing signals an effort by Apple to stratify its product offerings to target different groups of customers with different affordability levels.

Apple is scheduled to allow Chinese buyers to make reservations Oct. 19 for cheaper iPhone XR versions that will be priced between 6,499 yuan and 7,899 yuan.