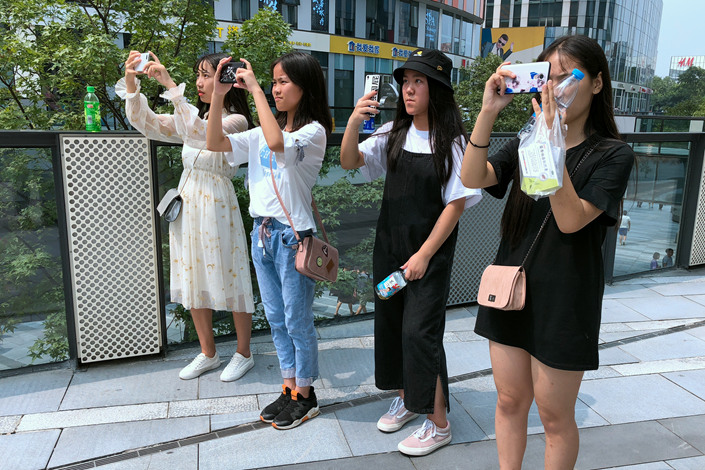 Huawei Technologies Co. Ltd. consolidated its place as China’s largest smartphone seller in this year’s second quarter, while Apple Inc. slipped, as leading companies get larger at the expense of fast-sinking smaller players, according to data released on Friday.

China is the world’s largest smartphone market, with 105 million units shipped in the three months through June — nearly a third of the world’s total, according to data-tracking firm IDC. The latest national figure was down 5.9% year-on-year, easing from a 16% plunge in the previous quarter as the nation saw a flood of cheap new models coming into the market in the last few years.

Many of those phones have come from a bumper crop of domestic Chinese names, capitalizing on increasingly lower barriers to entry with the maturing of technology. Their growing clout was reflected in a list released earlier this week that showed such brands took three of the top five spots in the global smartphone market in this year’s second quarter.

Chinese firms took the top four spots in their home market during the period, led by Huawei, whose share jumped by about six percentage points to 27.2%, according to IDC. Huawei also made headlines in the global figures earlier in the week when it passed Apple to become the world’s second largest smartphone seller, behind only global leader Samsung.

Huawei was followed in China by hometown rivals Oppo, Vivo and Xiaomi, respectively, with all the Chinese companies posting sales gains. Apple managed to stay in the top five by finishing fifth with 6.7% of the market. But its unit sales dipped 12.5% during the quarter from a year earlier, even though the company reported earlier this week that its Greater China revenue rose 19% during that time.

Apart from Apple, the big losers for the quarter were smaller brands. Companies outside the top five collectively saw their unit sales plunge 53.8%, as their overall share of the market fell to just 13.1% from 26.6% a year earlier. IDC said China’s market is in a state of long-awaited consolidation that is seeing the big get bigger at the expense of smaller brands.

“As leading manufacturers put a lot of targeted investment in the development of their brands, the space left to other manufacturers continues to dwindle,” IDC said.