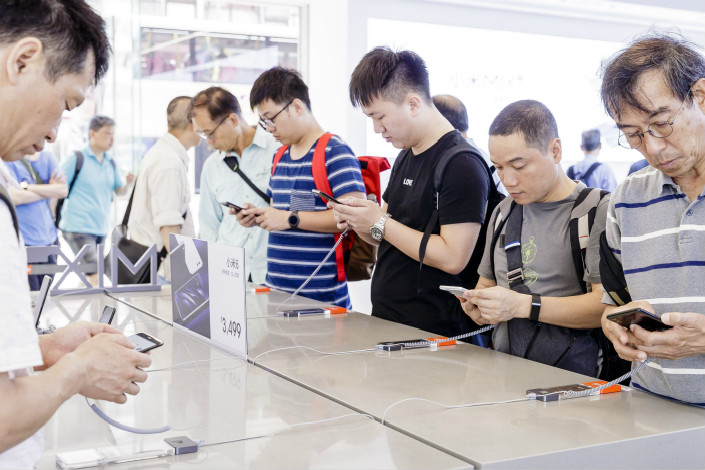 Customers look at smartphones displayed in a Xiaomi store on Hong Kong's Nathan Road on May 7. Photo: VCG

China’s smartphone sales fell 16% in this year’s first quarter, marking the market’s worst-ever contraction, as smaller brands took a beating in a long-awaited correction, according to data released on Tuesday.

The latest data from IDC, one of the industry’s most authoritative sources, reinforces previous figures from other smaller research houses showing that China’s smartphone market shrank anywhere from 8% to as much as 27% in the first three months of the year.

Smartphone shipments totaled just 87.5 million in the first quarter, well below the 100-million mark that has become standard fare over the last five years for the world’s largest market, according to IDC.

Among individual brands, Huawei Technologies Co. Ltd. retained its spot as the leading seller during the quarter. It only managed a small 1.9% gain in smartphones shipped during the period. But because of the market’s large contraction, its actual market share jumped more than 4 percentage points to 24.2%. The second largest player Oppo Electronics Corp. posted a slight market share gain to 18.9%, but saw its actual unit sales tumble 12.6%.

The quarter’s biggest winner was Xiaomi Inc., whose sales jumped 42% as its market share rose more than 6 percentage points to 15.1%. The biggest losers were smaller brands, those ranked below No. 5, whose sales and total share of the market fell by more than half.

“In terms of market scale, the decline in first-quarter smartphone sales was quite obvious,” IDC said. “The decline was driven by vendors’ focus on clearing out old inventory in Janaury and February in preparation for releasing new models. In addition, most new models were launched in mid- and late March as vendors consciously slowed the rate of new shipments to address market changes.”

IDC predicted the slowdown will prompt brands to release more flagship models with new features in the current quarter to stimulate demand. China is at once both the world’s largest and also one of its most competitive smartphone markets, with many smaller brands springing up over the last decade to take advantage of maturing technology that has lowered barriers to entry.

Three of the world’s top five smartphone makers came from China in the first quarter of this year, with Huawei, Xiaomi and Oppo taking the third, fourth and fifth positions respectively behind global leaders Samsung and Apple, IDC previously reported.