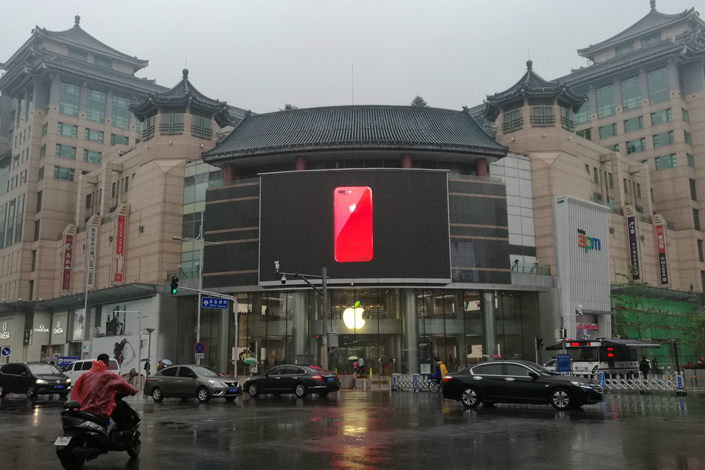 (Beijing) — Apple Inc.’s share of the China smartphone market grew strongly in the first three months of the year on healthy sales for its newest offerings, as the company and other major players continued to put the squeeze on smaller brands in the world’s largest market.

The China growth was the second best among all of Apple’s major regions, behind only Japan, which grew by a slightly faster 22%, according to Apple’s report.

“Apple still holds a large user base in China who haven’t upgraded in the past two years,” said Tarun Pathak, an analyst at Counterpoint, a research firm which released its own figures for the China smartphone market last week. “Apple is now back to year-on-year growth … which is an indication that its older generation iPhone user base is now upgrading. This can set the set the tone for the vendor’s full year outlook.”

Apple’s strong gains came mostly at the expense of the many smaller players in China’s crowded smartphone market, which is at once the world’s largest but also extremely competitive. Earlier reports have indicated the overall China market shrank in this year’s first quarter, with one government-backed body putting the decline at a sharp 27%.

Counterpoint’s report put the first-quarter decline at a more moderate 8%, as the total number of units shipped in the country dropped below 100 million for the first time in five years.

Hometown champion Huawei continued to consolidate its place as the market leader during the quarter, with its share rising two percentage points to 21.6% from a year earlier, according to Counterpoint. No. 2 player Oppo also posted a slight gain to 17.6%, while No. 3 Vivo’s share dropped more than a percentage point to 15.5%. Apple was the fourth largest player, as its share rose strongly to 14.3% from 10% a year earlier.

IDC analyst Kiranjeet Kaur noted that Apple’s actual China sales in terms of units shipped were nearly flat in the first three months of the year, and that the company managed its strong share gains simply by maintaining that level in the face of a sharp overall market contraction.

The big losers in China were smaller brands, whose share of the market plunged a full 10 percentage points to just under 18%, according to Counterpoint.

That downturn has begun to pressure some of those smaller brands, including names like Gionee, which in March made mass layoffs in one of its main plants in the southern city of Dongguan. In January the company’s Chairman Liu Lirong acknowledged that Gionee was embroiled in a financial crisis due to excessive spending on investment, operations and sales over the last two years.

This story has been updated to correct Apple's sales figures for the first three months of 2018.