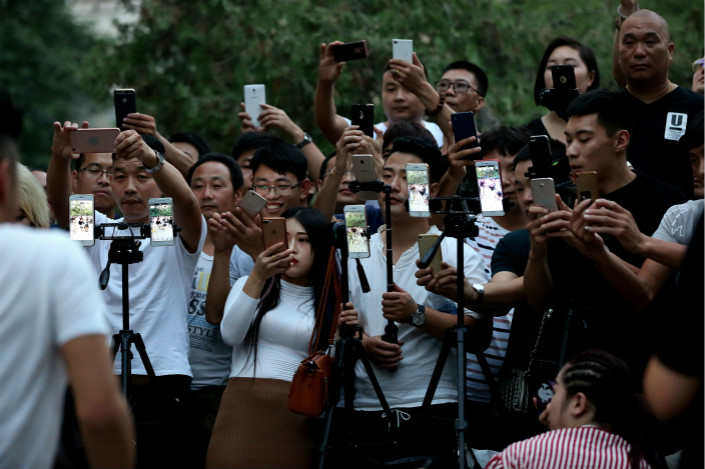 People use their mobile phones to film a performance in Zhengzhou, Henan province in September. Smartphone shipments in China declined 4.9% for the whole of 2017, according to market research firm IDC. Photo: VCG

The smartphone industry in China stumbled in the fourth quarter last year — its third consecutive quarterly drop — and further consolidation or bankruptcies are likely, analysts said.

Smartphone shipments in the domestic market declined 15.7% for the latest quarter, according to data Tuesday from market research firm IDC.

Smartphone shipments in China declined 4.9% for the whole of 2017, according to IDC.

“In 2017, the minor upgrades that Chinese smartphone companies made to their offerings were not enough to move consumers to splurge on new models,” said Tay Xiaohan, research manager of IDC Asia/Pacific's client devices team.

China’s smartphone industry is expected to see more consolidation or bankruptcies in 2018 as the cost of components — including memory and silicon wafers — continues to rise, according to Nomura Securities.

Device sales may recover in March and April when most manufacturers release new models, but it’s unclear if the momentum will persist, Teng said.

If domestic brands can add new functions, such as in-display fingerprint sensors or 3D touch features, consumer interest in new models may grow, but those technologies are still being developed, Teng said.