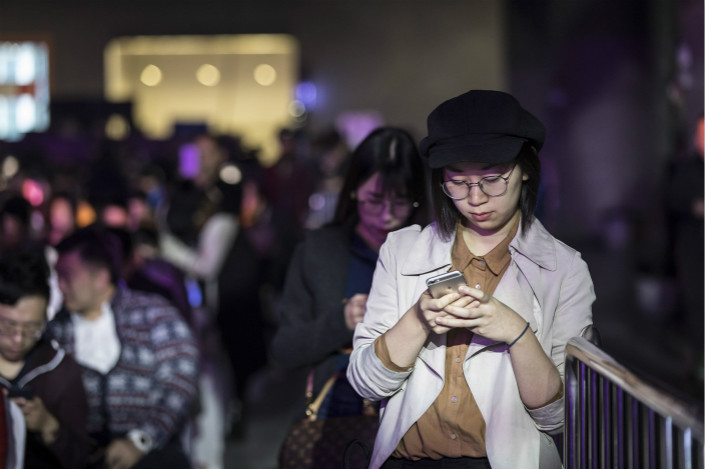 An attendee uses her smartphone on Monday at Tencent Holdings Ltd.’s WeChat Open Class Pro conference in the southern city of Guangzhou. Smartphone shipments in China fell nearly 10% in the first 11 months of 2017. Photo: Visual China

Demand for smartphones in China has become so low that Apple Inc.’s flagship iPhone X is selling for less than its official price.

The 6% price difference of a silver, 64-gigabyte iPhone X on online retailer JD.com and Apple’s official Chinese site epitomizes the current sluggish demand for phones in the world’s most-populous country.

Smartphone shipments in China declined nearly 10% to 448 million units in the first 11 months of 2017, while the number of new models launched by manufacturers plummeted 27% to 964, according to the Ministry of Industry and Internet Technology.

The entire industry is worried that the market will continue to struggle this year. Carriers have lost their incentive to promote 4G phones, which have already secured a 70% market share. Meanwhile, trendy full-screen phones, which spurred many unprepared manufacturers to follow suit, have left the more-traditional models unwanted on store shelves.

The decline has and will not only affect smartphone sales, but also the component suppliers, which have suffered reduced orders. Some flexible Chinese phone-makers, such as Huawei Technologies Co. Ltd. and Xiaomi Inc., have started to diversify their products and wager on other emerging markets.

Shipments of smartphone screens have been a key indicator of the phone business.

Shipments of another major supplier, Japan Display Inc., or JDI, decreased 26% to 37 million units during the same period.

The drop in screen demand shows that sales of smartphones have been weak, said Li Yaqin, deputy general manager of Beijing-based consultancy Sigmaintell, which focuses on the display market.

The entire smartphone supply chain, not just the part affecting screens, has suffered in the downturn. A component supplier of Chinese phone brand Oppo Electronics Corp. told Caixin that the client has recently “cut quite a few orders” as sales have dropped.

In response, Oppo said that it didn’t know about the order reduction, and that the entire smartphone market indeed shrunk in 2017, but the company has continued to perform well.

It is normal for phone-makers to cut component orders near the end of the year as phone sales have been weak in November every year. Both suppliers and phone manufacturers are reluctant to admit it because share prices would suffer as a result, said Sun Yanbiao, head of Shenzhen-based research company N1 Mobile.

Apple shares closed down 2.5% on Dec. 26, the day after Taiwan’s Economic Daily reported the tech giant would cut its iPhone X orders by 40% in the first quarter of 2018. Shares of other Apple suppliers, including Broadcom and Skyworks Solutions, have all dropped.

When asked about the order cuts, an Apple spokesperson didn’t comment but quoted CEO Tim Cook, who said in December at a Fortune event that he “couldn’t be happier” when it came to early iPhone X demand in China.

Similar order-reduction rumors involving Huawei and Vivo have surfaced from the supply chain since December. Huawei told Caixin that its phones sold well last year and the company remains optimistic about this year. A Vivo spokesperson said that the company is doing well and hasn’t heard of any order cuts.

Wang Yanhui, secretary general of industry association Mobile China Alliance, said that the China market will shrink in 2018 because customers don’t have reasons to change phones.

There are many reasons behind the setbacks. Li from consultancy Sigmaintell said that carriers’ motive to promote 4G phones, which have already secured a market share of 70%, have died down.

She added that the concept of full-screen phones, which was initiated by Xiaomi founder Lei Jun and accelerated by the launch of the iPhone X, has been so far an undefined specification that manufacturers play with to convince consumers to upgrade their phones when the market is in recession.

Besides, other cutting-edge technologies of the iPhone X, including facial recognition and wireless charging, have enticed other competitors to follow suit and modify their designs.

Li said that such sudden changes in expectations have forced unprepared phone-makers to launch the new products at least two months later than they planned, thus reducing the sales of the entire year.

As the most major phone brands have shifted to full-screen smartphones, there will be a large number of traditional models that need to be cleared away, said Zhu Wei, president of telecom device retailer FunTalk.

Certain brands bear the setback for their own reasons. For example, South Korea-based Samsung, whose Galaxy Note 7’s exploding batteries were a public relations disaster, suffered in the China market where consumer sentiment soured amid Seoul’s decision to host the THAAD U.S. anti-ballistic-missile system, a move Beijing opposes.

Chinese phone-makers Oppo and Vivo saw their hardware costs double after they shifted to Qualcomm Inc. for their chip supplies, a person from a phone firm’s management, who asked not to be identified, told Caixin.

Major Chinese smartphone-makers have beat their foreign rivals, such as Apple and Samsung, in terms of growth. In the third quarter of 2017, Huawei, Oppo and Xiaomi have grown much faster in terms of shipments, especially Xiaomi, which recorded the highest growth at 102.6%, according to International Data Corp. (IDC).

But they owe their successes to the overseas markets, especially the emerging ones, IDC said.

“The biggest catalyst for growth was success in the India market,” IDC said in a report. “Discounts on most of the models along with the aggressive bank offers and easy financing options made Xiaomi’s top models attractive for online purchase.”

Oppo, which IDC identified as the second-fastest-growing firm, had a similar story. “Its continued expansion outside of mainland China continues to be a success,” IDC said.

Huawei, after having drawn some benefit in Europe, has marched into the U.S. Although its sales partnership with carrier AT&T Inc. collapsed over security concerns, it continued with the push, which included hiring actress Gal Gadot, star of the 2017 summer blockbuster “Wonder Woman” and the follow-up “Justice League,” as the company’s “chief experience officer.”