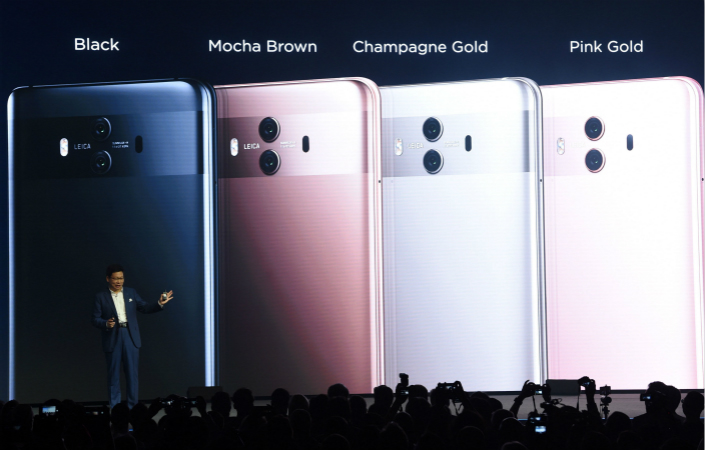 Huawei phones are currently available in the U.S. only through some electronics stores and online platforms, including its own U.S. website, Amazon and local retailer Best Buy. Above, the president of Huawei’s consumer business, Richard Yu Chengdong, presents the Mate 10, which the company will soon allow U.S. carriers to sell. Photo: Visual China

The company will first offer U.S. consumers its flagship Mate 10, but declined to name a price or say through which carrier or carriers they would be sold, the Associated Press (AP) reported, quoting the president of Huawei’s consumer business Richard Yu Chengdong.

Yu said he will announce details at next month’s Consumer Electronics Show in Las Vegas, according to the AP.

Huawei phones are currently available in the U.S. only through some electronics stores and online platforms, including its own U.S. website, Amazon and local retailer Best Buy. However, the handsets are usually sold at full price and therefore aren’t as attractive as those that come as part of carrier packages, which offer steep discounts on the phones.

Both Huawei and Chinese phone-maker Xiaomi Inc. are reportedly in talks with U.S. wireless carriers about selling smartphones to American consumers as soon as next year, Bloomberg reported, citing unnamed sources. The carriers in the negotiation included AT&T Inc. and Verizon Communications Inc.

Huawei, the world’s third-largest smartphone manufacturer and China’s top phone brand, in terms of market share, has stayed out of the top five in the U.S. market, according to market research firms IDC and Strategy Analytics.

Its expansion to the U.S. has suffered setbacks before. In 2013, the U.S. House Intelligence Committee, a congressional panel, recommended phone carriers avoid using equipment supplied by Huawei or a smaller Chinese peer, ZTE Corp. due to potential security concerns.

“They are lying,” said Huawei’s Yu. “We are a company that really cares about cybersecurity and privacy protection. We do a lot better than the other vendors,” the AP reported.

Yu added that the company plans to start selling through carriers in Japan, where its products are sold in stores.