By Mo Yelin and Huang Rong 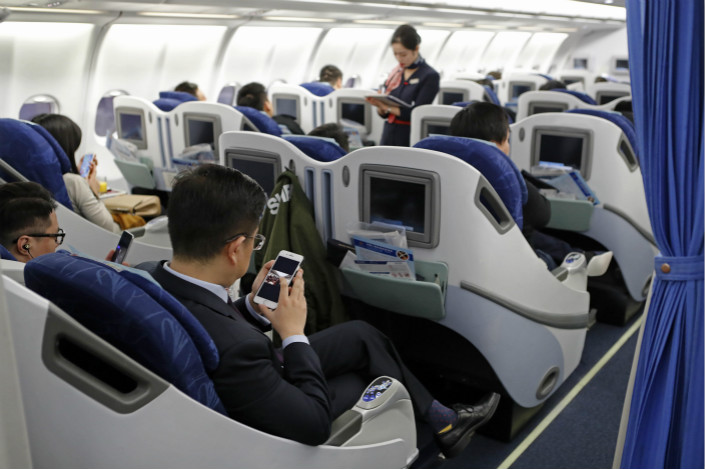 The lifting of a ban on electronic devices during flights came after a series of reform moves aimed at decentralizing the decision-making powers in the sector. Photo: Visual China

Thirteen Chinese airline companies have said they now allow passengers to use electronic devices, including cellphones, during flights, after the country’s aviation regulator eased rules on the matter.

The new rule, which took effect Sunday, says that “portable electronic devices (PEDs) such as mobile phones, e-book readers and gaming consoles will be allowed to connect to the plane’s Wi-Fi system, but they have to be switched to ‘flight mode,’” which disables 4G service and phone calls, Air China said in a statement over the weekend.

The news came months after the Civil Aviation Administration of China (CAAC) said carriers would have the right to decide when and what kind of portable electronic devices passengers can use during the flight after the airlines evaluate their impact on flight safety.

China has previously banned the use of electronic devices on jetliners, saying “it would disrupt the signal system and influence the safety of flights.”

The ban’s lifting came after a series of reform moves by CAAC that were aimed at decentralizing the decision-making powers in the sector and loosening the government grip on it.

Earlier this month, the CAAC and China’s top economic planner, the National Development and Reform Commission, issued a document that gave airlines more freedom to set prices on some of the country’s busiest air routes, including those connecting the Chinese capital with the country’s financial hub, Shanghai, or industrial powerhouse Guangzhou.

Last week, the CAAC also relaxed restrictions on private investment in the industry, reducing required government ownership of the country’s three biggest airlines to less than 50%.

Lowering the required ownership percentage that the government must have while still requiring it to be the largest shareholder will guarantee the state has the final say on management issues, according to the regulator.

The industry has welcomed the CAAC’s recent move toward more market-oriented policies. One industry insider who declined to be named told Caixin the aviation regulator “is increasingly clear about its role, which is to improve the service quality in the sector and guarantee the safety of passengers.”

He expects the CAAC will further open up the industry, including easing approval process for aircraft imports.