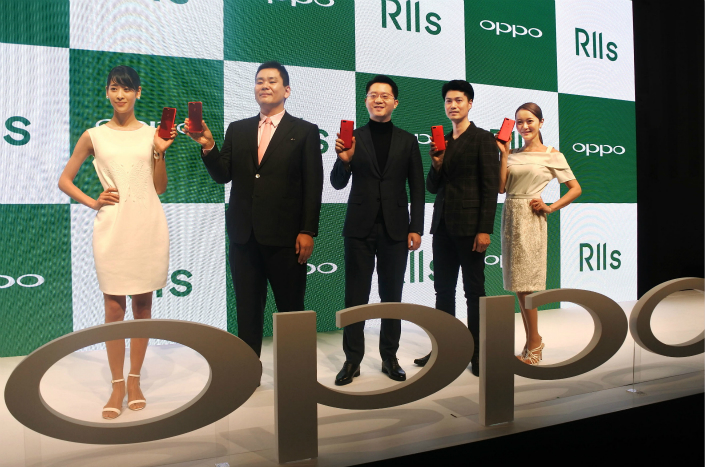 Deng Yuchen (center), head of the Japanese arm of Chinese smartphone maker Oppo Electronics Corp., poses for photos during a news conference in Tokyo on Wednesday, during which the company announced its plans to start selling Oppo handsets in Japan. Photo: VCG

Top Chinese smartphone-maker Oppo Electronics Corp. is entering the Japanese market with the launch of its flagship R11s smartphone there next week, the company announced at a Tokyo news conference Wednesday.

The move marks Oppo’s latest foray into a developed market, after having introduced its products in Singapore, Australia, New Zealand, and 27 other countries.

Deng Yuchen, head of Oppo’s Japan unit, said in a statement that in the future, Oppo will “learn from the successful experiences of Japanese consumer electronics brands” and was confident it will be able to “win the acceptance and love of the Japanese market.”

Oppo set up a Japanese subsidiary in November in order to prepare for local operations. The Chinese company has also opened a research and development center in Japan that focuses on smartphone-camera technology.

Oppo’s R11s phones are aimed at selfie-takers, featuring a high-resolution front camera as well as a built-in “Beauty Mode.” The company, which produced its first phones in 2008, is China’s second-largest smartphone-maker by market share, according to 2017 data published by IDC.

Oppo began establishing its business outside of China in 2009 with product launches in Thailand. It has a significant presence in Southeast Asia, South Asia and Africa. But as developing smartphone markets become increasingly saturated, the company has turned to more-mature markets.

The Japanese cellphone market has been relatively insulated from global trends, with Apple’s iPhone accounting for over 50% of the country’s smartphone sales in 2016, compared to Apple’s global market share that year, which was 14.5%, according to Strategy Analytics. Additionally, Japanese consumers have been slower to adopt smartphones, with over half of cellphone users still using domestically manufactured flip phones in 2015, according to research company Emarketer.

Oppo is not the first Chinese phone-maker to attempt to establish itself in the Japanese market — ZTE Corp. launched its Blade V8 smartphone there in early 2017, and has also announced plans for a Japanese launch of its dual-screen Axon M.