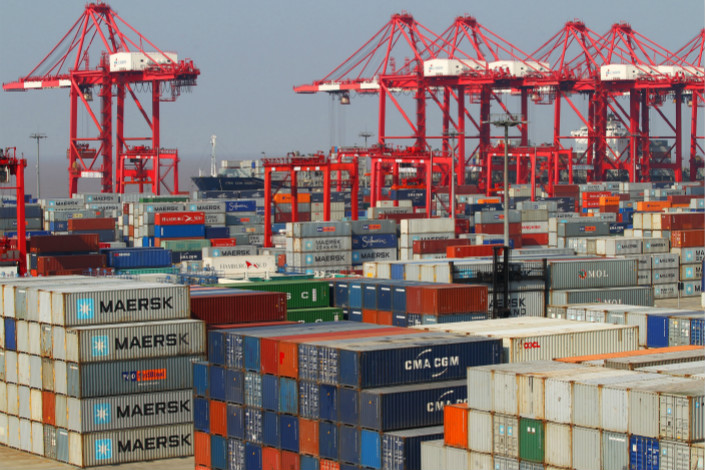 President Donald Trump has put tackling the U.S.’s growing trade deficit with China and boosting American firms’ access to its markets among his top priorities since coming to power. Photo: Visual China

The United States, European Union and Japan have united to tackle what they see as unfair or protectionist trade measures used by third countries, in what the U.S. media has described as a shot across the bows of China, the world’s biggest goods exporter.

In a joint declaration issued at a World Trade Organization (WTO) summit on Tuesday, the three parties attacked policies that they say distort international trade. They highlighted “severe excess capacity in key sectors” fueled by government support, market-distorting subsidies and state-owned enterprises. They also took aim at countries they claim force companies to transfer their technology in return for market access, and impose local-content requirements.

“We, to address this critical concern, agreed to enhance trilateral cooperation in the WTO and in other forums, as appropriate, to eliminate these and other unfair market distorting and protectionist practices by third countries,” the statement said. The document, which did not name any specific country, was signed by U.S. Trade Representative Robert E. Lighthizer, EU Trade Commissioner Cecilia Malmström and Japan’s Minister of Economy, Trade and Industry Hiroshige Seko.

Bloomberg News quoted trade officials at the summit in Buenos Aires as saying that the new alliance is designed to be a clear warning shot to China as it seeks to broaden its influence over global trade. The Wall Street Journal cited two people familiar with the statement said it was “aimed squarely at influencing policy in Beijing.”

Many developed countries have long accused the Chinese government of giving subsidies and other support to help exporters sell products abroad at prices below fair value — a practice known as dumping. They have also complained about Beijing’s rules to force foreign companies to transfer technology and use locally made products when investing and manufacturing in China.

President Donald Trump has put tackling the U.S.’s growing trade deficit with China and boosting American firms’ access to its markets among his top priorities since coming to power. His administration has slapped anti-dumping tariffs on a range of Chinese imports, toughened its stance on Chinese investment in the U.S., and is considering an investigation into whether Chinese companies are stealing the intellectual property of U.S. companies.

The U.S. and the EU are also at loggerheads with China at the WTO over the issue of the country’s status as a market economy for the purposes of anti-dumping investigations. China agreed to being assessed as a non-market economy for 15 years when it joined the global trade body in 2001, but that designation should have ended on Dec. 11, 2016.

China says it should now be treated as a market economy but Washington and Brussels have opposed its demand and a dispute settlement case started by Beijing last year is now going through the WTO.

The U.S. and EU argue that China’s domestic prices are not market determined as the government still plays an overwhelming role in the economy through policies such as granting subsidies and giving preferential treatment to state-owned enterprises on issues such as market access and loans.

China has been the target — either solely or jointly with other countries — of 103 out of 156 anti-dumping and anti-subsidy investigations completed by the U.S. since 2002, and is named in 19 out of 38 active investigations, according to data from the Department of Commerce.

Among the 30 so-called “trade defense” probes currently being conducted by the EU against imports into the bloc, 20 cases involve China, figures from the European Commission show.

The U.S. and EU also blame China, which has been struggling to reduce excess domestic steel capacity, for flooding the global market with cheap steel products. They have slapped punitive tariffs on various steel products from China, including corrosion-resistant steel and stainless steel.