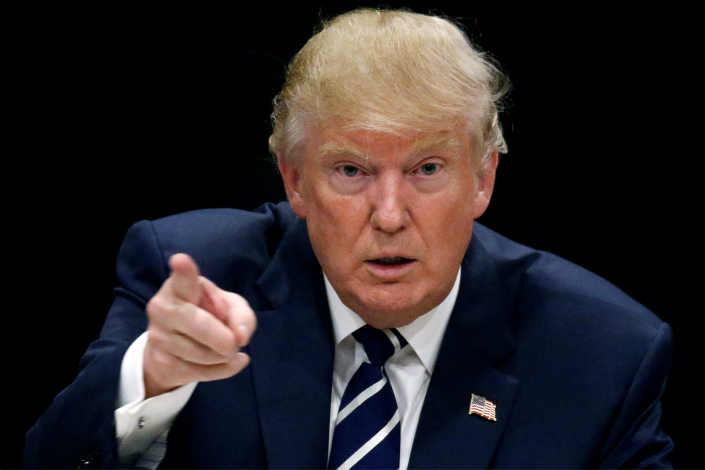 China’s Ministry of Commerce has signaled it will explore responses to U.S. president telling his trade negotiator to look into possibility of theft of U.S. intellectual property. Above, Donald Trump appears at a roundtable event in the U.S. on October 28 during his successful campaign for president. Photo: Visual China

(Beijing) — China said it won’t “sit back and watch” after U.S. President Donald Trump asked for a probe into whether Chinese companies are stealing American intellectual property.

Trump on Monday signed an executive memorandum directing U.S. Trade Representative Robert Lighthizer to determine whether to investigate Chinese government policies and practices “that may be unreasonable or discriminatory, and that may be harming American intellectual property, innovation, and technology.”

In response, China’s Ministry of Commerce (MOFCOM) said it was “gravely concerned” about the move and vowed to defend its interests if a trade negotiator probe and subsequent moves damage China. China didn’t specify what steps it might take. “We hope the U.S. Trade Representative respects facts and takes action in a prudent manner,” the ministry said in a statement on its website.

“If the United States ignores facts and shows no respect for multilateral trade rules by taking action that will harm bilateral trade relations, China will not sit back and watch, and will definitely use all appropriate measures possible to firmly defend its lawful rights and interests,” the ministry said.

Trump, whose administration has taken a protectionist approach to bilateral trade relations, used China as a punching bag last year during his campaign for president. He has frequently criticized China’s yawning trade surplus with the U.S., sparking worries about a possible trade war between the world’s two largest economies.

Trade war concerns eased after Trump and his Chinese counterpart Xi Jinping agreed in April to undertake trade talks for 100 days in an effort to boost U.S. exports to China. So far, progress has been made in areas such as American beef, which China is now importing for the first time in years.

“The U.S. probe of China’s intellectual property practices is leading to an escalation of tensions in Sino-U.S. trade relations,” Zhao Yang, chief China economist with Nomura International, said in a note Tuesday.

Chinese exports to the U.S. rose only 8.7% year-on-year in July, down from almost 20% in June, Chinese customs data showed.

But Zhao called a Sino-U.S. trade war unlikely. Any cross-border tariffs imposed by Washington may have only a “minor impact” on the Chinese economy, yet could fuel U.S. consumer price inflation and hurt its economy, he said.

Trump’s decision also came amid Washington’s effort to prod Beijing into ratcheting up pressure on North Korea over its nuclear and ballistic missile programs.

MOFCOM said Monday China would ban imports of coal, iron ore, seafood and other goods from North Korea starting Tuesday in compliance with open-ended U.N. Security Council sanctions approved Aug. 6 in response to two ballistic missile tests last month. The ministry’s announcement marked an extension of China’s boycott of North Korean coal that began in February and was set to expire at the end of the year.