Apple Rolls Back to China Growth, as Xiaomi Zooms in India 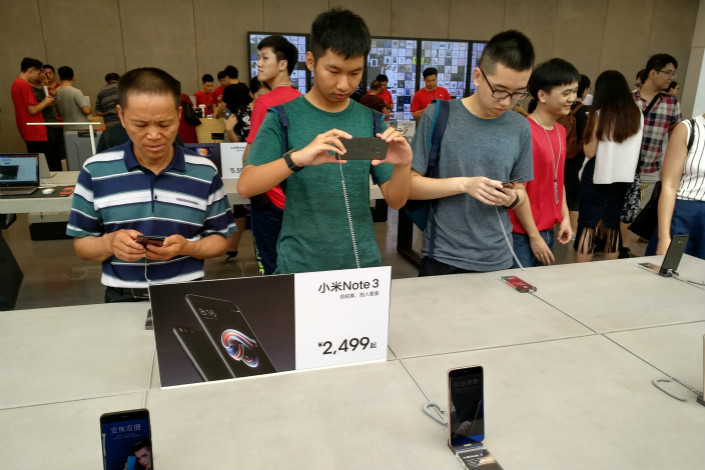 Smartphone-maker Xiaomi Inc. doubled its sales in the third quarter, boosting its global market share to 7.4%. Above, Xiaomi customers try out the company's smartphones at its flagship store in Shenzhen on Sept. 27. Photo: Visual China

China is the world’s largest smartphone market and accounts for about a third of all global sales, making it a must-play arena for all global contenders. But it has also become one of the world’s most contested markets, with global giants like Apple Inc. and Samsung Electronics vying for share with a vibrant field of homegrown local players like Huawei Technologies Co. Ltd. and Xiaomi Inc.

That competition led to shrinking sales in China for Apple since the end of 2015, before the company returned to growth in its latest reporting quarter, according to its latest results released on Thursday. The U.S. technology giant said its Greater China sales, which include all of its products across the Chinese mainland, Hong Kong and Taiwan, rose 12% to $9.8 billion for its quarter through September.

That growth was the same as the company’s global rate, which also saw revenue rise 12% to $52.6 billion. That means Greater China now accounts for about a fifth of Apple’s global sales. The company was buoyed in China by the release of its latest iPhone 8 models in September, and also the buzz generated by the release of the iPhone X, said IDC analyst Tay Xiaohan.

“For Apple, there has been pent-up demand for the iPhone as we already know, and it shows that everyone has been holding out and waiting for Apple to upgrade their iPhones in China,” she said. “There's a lot of excitement now about the iPhone X in China,” she added, pointing out that sales of that model starting this week should help Apple maintain positive growth for China in the fourth quarter.

Separately, new data showed that Chinese companies continued to take three of the top five spots for global smartphone sales in the third quarter. Samsung and Apple led that list at the No. 1 and No. 2 positions respectively, each posting single-digit growth from a year ago, according to IDC data released on Friday. They were followed by Huawei, which was No. 3 with a 16% sales increase; and Oppo, with a 19% gain.

But the biggest gainer on the list was Xiaomi, whose doubling in sales boosted its global market share by a similar amount to 7.4%, according to IDC. The company was once one of China’s hottest high-tech companies, but later stumbled due to product and logistical issues as well as a model that relied too heavily on online sales. The company has moved to fix many of those issues, and has performed especially well in India, where it is now the market’s No. 2 player, according to IDC.

“Xiaomi has better managed its supply chain issues this year and also it’s better managing its channels,” Tay said. “Other than increasing its number of (brick-and-mortar) stores, it also offered models with different storage space and colors to the offline channels to better differentiate its models to retailers. It also worked more closely with the operators in China, and that also helped it to grow.”