Xiaomi Looks to Rekindle Buzz With ‘All Screen’ Smartphone 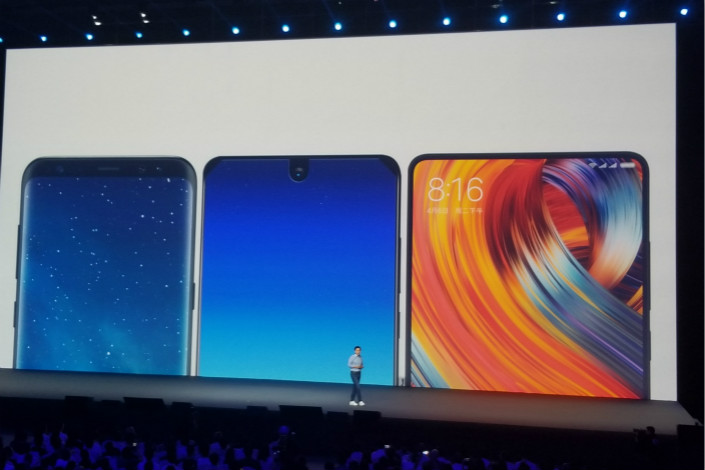 (Beijing) — Smartphone-maker Xiaomi Inc. on Monday unveiled a second edition of its well-received model with a face that is nearly all screen, as the former highflier tries to continue clawing its way back from a series of major stumbles.

The company, which has been rebuilding over the last two years, is hoping the Mix 2 will allow it to maintain its recent momentum following a strong performance in the second quarter. That late-spring bounce marked a sharp turnaround for Xiaomi, which charmed the world with its early success before falling on hard times.

The new model takes over for the original Mix, which impressed users with its unusual design that gives nearly all of its face to the display with only razor-thin borders, which the company likened to “holding a piece of transparent glass.”

The new phones will go on sale on Friday at a starting price of 3,299 yuan ($508), representing the high end of the company’s models but a relatively midrange price for the industry as a whole. Xiaomi should get a small lift from the model in the current quarter that runs through the end of September, and should also get some good publicity if the model is well-received, analysts said.

Xiaomi’s nascent comeback saw it post nearly 60% sales growth in the second quarter of this year, enough to lift it back into the top five global vendors with 6.2% of the worldwide market, according to data tracking firm IDC. The company now sells its phones in about a dozen markets outside of China, mostly in developing countries like India and Russia.

During its heady early days, Xiaomi welcomed comparisons of itself to a homegrown Chinese version of global giant Apple Inc. But such comparisons have become rare over the last two years as Xiaomi suffered from product problems and was hobbled by an online-only sales model that shut out many consumers who still prefer to buy smartphones in brick-and-mortar shops.

The Mix 2’s launch comes just a day before the much-larger Apple is expected to unveil its next rendition of the iPhone at an event in the U.S.

“I think they wanted to (launch the Mix 2 on Monday) before Apple because once Apple announces the launch of the iPhone 8, all the media attention will be on Apple, and Xiaomi’s launch would pale in comparison,” said IDC analyst Tay Xiaohan. “It hasn’t been shy about its comparison with Apple in the past, and I am not surprised if they want consumers to compare them with Apple again.”

Tay added that the Mix 2 could enjoy strong sales, following less-stellar figures for the earlier model due to its newness and problems creating enough phones. But the overall impact of the Mix 2 on Xiaomi’s comeback will be modest since much of its sales come from lower-end models that have made the company a hit in developing markets like India.

“But what (the Mix 2) can do is to continue to try to increase its share of midrange and high-end phones,” she said. “I think one of its reasons for launching the Mi Mix model is also to show everyone that it’s capable of launching high-end phones that possess similar capabilities compared to the likes of Apple.”