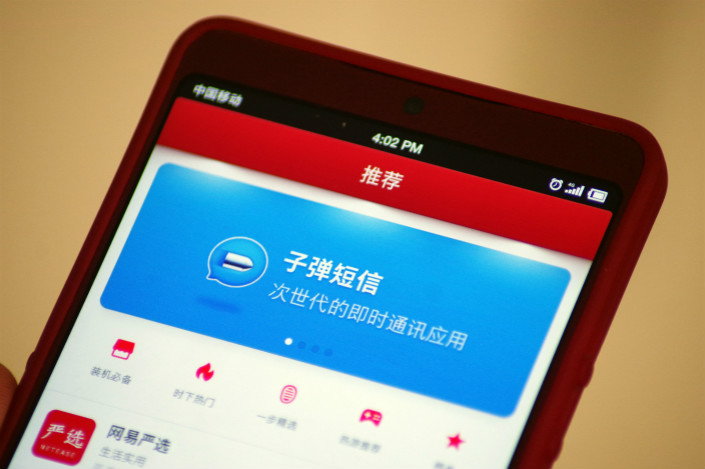 Bullet Message, the social media upstart touted as a challenger to Tencent’s ubiquitous WeChat, has become available again after being removed from Apple Inc.’s App Store in China on Tuesday for potential content violations.

Backed by niche smartphone designer Smartisan, the app created a sensation after garnering 5 million users within two weeks of its August launch, drawing praise for its clean design in contrast with WeChat’s increasingly crowded storefront and “Wallet” section.

The company made a brief statement on Wednesday morning that it was ready again for download at Apple’s App Store, without elaboration.

The fledgling app, which briefly topped its larger rival in downloads from Apple’s local iOS store, became unavailable as of Tuesday afternoon. Searches turned up only unrelated results.

“Bullet Message is temporarily removed from the Apple Store because news content provided by our partner drew complaints of possible image copyright issues,” a Smartisan representative said in a message in response to Bloomberg inquiries. “We are verifying the details with our partner and will notify the public once downloads resume.”

WeChat has come to rule China’s smartphone world by becoming a one-stop platform with offerings as diverse as video chatting, payments and food delivery. But Bullet won fans by focusing on a few things it did well, including a voice-to-text option that its operator claims delivers real-time Mandarin transcriptions with an accuracy rate of 97%. Its original newsfeed actually relied on WeChat for traffic, but that link was severed soon after it was launched. That didn’t stop Bullet from amassing almost 7.5 million users as of Sept. 20, by its own reckoning.

Its initial funding included 150 million yuan ($22 million) from Gaorong Capital, Chengwei Capital and Smartisan Technology Co. The platform, however, has been criticized for the amount of readily viewable pornography — a red flag for Beijing regulators. Others have expressed concerns over privacy terms and the security of user information, as Bullet allows anonymous participation on group chats.