U.S. Stocks Sink Most Since June on Trade, Yield Angst 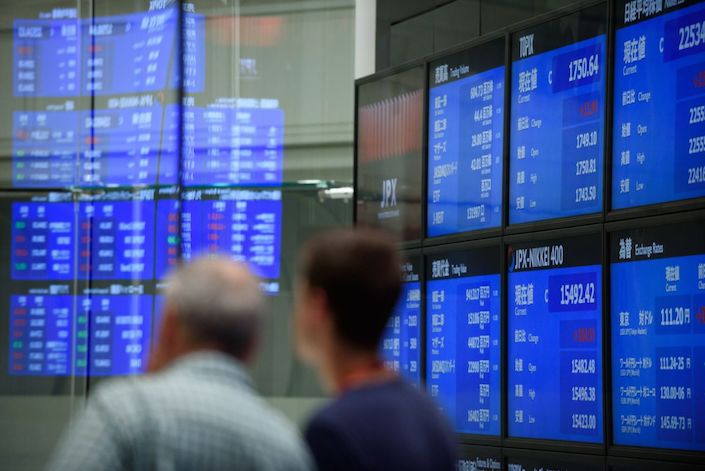 (Bloomberg) — A risk-off tone gripped financial markets, with U.S. stocks falling the most since June as the effects of the trade war hit corporate profits. Treasuries pared losses and the yen rose on demand for haven assets.

The S&P 500 fell to a seven-week low, the Dow Jones Industrial Average plunged more than 400 points and the Nasdaq 100 Index tumbled 2.5% in a broad selloff in U.S. equities. Boeing and Caterpillar dropped at least 3.3%, while computer companies dragged the broader measure to its longest slide since Donald Trump’s election win.

Fastenal Co. added to angst that the trade war with China is raising materials costs that will crimp profit margins. Estee Lauder and Tiffany led losses after French luxury goods maker LVMH confirmed China is enforcing customs rules more strictly as trade tensions remain high. The Cboe Volatility Index hit the highest since June. Oil fell from $75 a barrel even as a major hurricane headed for the Florida Panhandle.

“The biggest thing going on in markets is you’re seeing an unwind,” Sameer Samana, a global quantitative and technical strategist for Wells Fargo Investment Institute, said by phone. “You had stocks doing really well, rates for the most part were very well-behaved. When you’ve got these risk-off moments, especially when you’re later in the cycle, there is some concern on the part of investors where it’s like, ‘Is this the beginning of the end?”’

Caution remains the key word across global markets as investors try to gauge whether the recent selloff has room to run. Valuations look more appealing, but the backdrop to trading is still dominated by deepening U.S.-China tensions and a surge in volatility for stock and bond markets. While the Treasury rout has eased, a glut of new U.S. debt is coming to the market this week. Following the American producer price data are consumer figures, which land on Thursday and may determine where yields go from here.

In Europe, the Stoxx 600 Index dropped as declines for industries including miners and automakers outweighed gains in telecom companies and banks. Shares in Japan rose after four days of losses while those in China edged up, and South Korean equities slumped as trading resumed after a holiday.

Elsewhere, Italian bonds erased a slump as the deputy premier predicted yields on the debt won’t blow out too far because of the government’s budget plans. The South African rand slipped following Tuesday’s rally. American crude traded near $75 a barrel as Hurricane Michael curtailed offshore oil production and the IEA issued a warning to the global market.