Daniel Gros: Winners in Sino-U.S. Trade War — Everyone Else 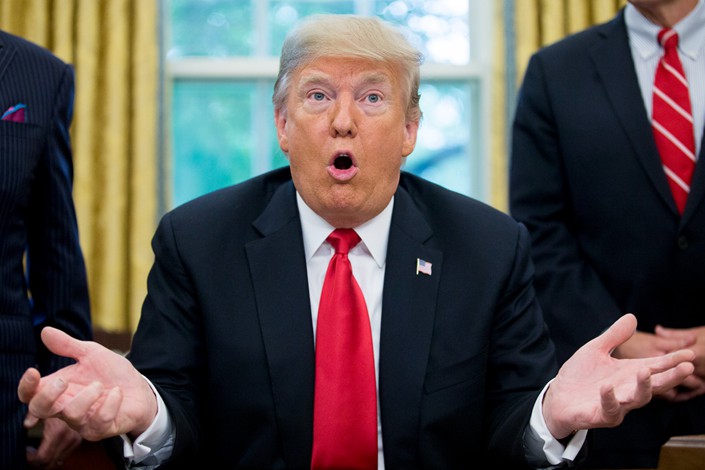 BRUSSELS — The contours of U.S. President Donald Trump’s trade strategy are becoming clearer by the day. America’s trading partners face dramatic threats. But as the revamp of the United States-Korea Free Trade Agreement and the “reform” and renaming of the North American Free Trade Agreement demonstrate, most countries need to offer only minor concessions to appease Trump. The only country Trump really cares about — his “public enemy No. 1” — is China.

The scene is thus set for a Sino-American showdown, with all of its weighty and unforeseeable geostrategic implications. But, for the rest of the world, this might not be such bad news. In fact, economic theory suggests that there is truth in the old adage: “When two quarrel, the third rejoices.”

Until recently, trade policy overwhelming served liberalization. From the 1960s to the 1990s, this process was driven primarily by generalized reductions in tariffs, agreed under the auspices of the General Agreement on Tariffs and Trade (GATT) and the GATT’s successor, the World Trade Organization. Yet the most recent attempt at universal tariff reduction — the so-called Doha Round — never came to fruition, mainly because India (not China) opposed opening up some of its key markets.

To some extent, regional trade agreements — which typically included like-minded economies that were already deeply integrated — helped to sustain the liberalization momentum. But economists have always been skeptical about such agreements because they are by nature “preferential.” When trade barriers are lowered for the few trading partners included in the regional agreement, producers in those countries tend to shift their attention to those partners, causing imports from other countries to decline.

In other words, rather than spurring increased trade overall, regional agreements may primarily divert it: trade increases among participating countries, to their benefit, but declines for third parties, which incur (small) costs. A huge amount of empirical literature on existing preferential trade agreements supports this conclusion.

This suggests that, if a group of major trading countries does the opposite — increasing tariffs only for one another — third parties should benefit. So, should other countries — from Europe to Asia — welcome the “negative preferential trade agreement” according to which the U.S. and China are effectively operating?

A substantial share of U.S.-China trade is thus likely to be diverted to Europe, Japan, and other Asian economies close to the Chinese market. The European Union is likely to reap particularly large benefits because it remains one of the largest trading partners of both the U.S. and China, and because European producers are often U.S. companies’ closest competitors.

While virtually any negative preferential trade agreement would probably have some benefits for third parties, those benefits are likely to be particularly large in the case of a U.S.-China “agreement.” Trade diversion has often been regarded as a theoretical construct with little real-world significance because most of the economies engaged in preferential trade agreements already had rather low tariffs. As a result, any change to the tariff — and thus its broader effect on trade — has been small.

The Sino-American trade war is different because the two economies, previously rather open to each other, are imposing substantial trade barriers. Already, the U.S. is imposing 10% tariffs — four times the U.S. average — on more than $200 billion worth of Chinese goods. Next year, the tariffs may be increased to 25% (10 times the U.S. average tariff on imports from other countries) and expanded to include a broader range of imports. This implies that trade diversion could be substantial.

To be sure, the trans-Atlantic economy’s high degree of integration could act as a mitigating factor. For example, Airbus might displace Boeing in the vast Chinese market, but more than one-third of the value-added of an Airbus aircraft is contributed by the U.S. This is one reason why Trump might choose to prolong the truce with the EU reached in July.

Ultimately, however, it seems likely that the Sino-American confrontation will shift global trade significantly. This may benefit most of the world’s economies, but it will also have serious consequences for the U.S. and China, where consumers and enterprises relying on imported machinery will have to pay more.

The losses are likely to be larger for the U.S. than for China because Chinese imports from the U.S. include a larger share of agricultural commodities for which alternative suppliers are relatively easy to find. For example, China can import soybeans from Brazil instead of the U.S. at little additional cost. Moreover, Chinese countervailing measures have been more moderate; there is little prospect of a blanket 25% tariff on U.S. imports.

All in all, the Sino-U.S. trade war may lead to some losses for China, but those losses will likely be dwarfed by the costs incurred by the U.S. itself. Meanwhile, the rest of the world may well have reason to wish both sides a long and fruitful conflict.

Daniel Gros is director of the Center for European Policy Studies.