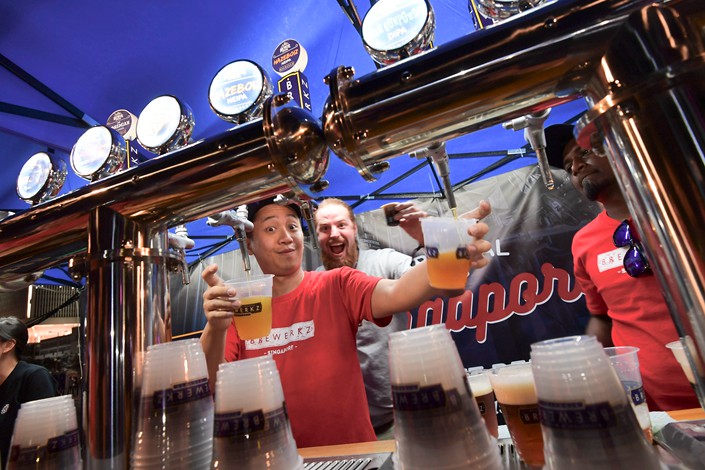 Beertopia, the largest craft beer festival in Hong Kong, is held in the city’s Central Promenade on Oct. 6. Photo: IC

The craft beer revolution, which has taken the U.S. by storm in recent years, is well underway in China. While just a decade ago artisanal brews were a rare thing in China, cities all over the country now either have their own craft breweries, or locations one can buy either imported beers or those made elsewhere in China.

“People around the world are interested in consuming better things,” Alex Acker, co-founder of Beijing brewery Jing-A, told Caixin. “Within the world of beer, for decades people had industrial lagers like Yanjing or Tsingtao or Budweiser. They were overdue for some creativity and something a little bit more interesting.”

While craft beer is still a small part of China’s beer market, it belongs to a rapidly growing sector of the market.

Euromonitor data shows that in the four years preceding 2017, while China’s overall beer market decreased by volume from 50.5 billion liters (13.3 billion gallons) in 2013 to 45.5 billion liters, the total value grew from $66.3 billion to $84.7 billion. It’s estimated that by 2022, this trend will have continued, with volume hitting 44.9 billion liters and sales value increasing to $108.0 billion.

“The increase in value sales is mainly due to product structure change,” said Weiji Chen, analyst at Euromonitor International. “Premium and midprice products such as imported lager, wheat beer and stout are gaining shares, driving up the value sales despite decreasing volume sales.”

Chen predicted that “consumption upgrade and beer ‘premiumization’ are expected to continuously drive the rapid growth of craft beer.”

Chandler Jurinka, co-founder of Beijing’s Slow Boat Brewery, said that given the level of saturation in more-developed markets, “China is now the growth opportunity for all breweries in the world.”

Getting locals through the door

The brewpub — where beer is made in the same place it’s sold — has been at the vanguard of this movement in some of China’s biggest cities.

Beijing is dotted with well over a dozen brewpubs or dedicated craft beer bars, most of which have opened in the last few years. Among them are Panda Brew’s cozy bar, tucked in a centuries-old alley; and Slow Boat Brewery’s multistory brewpub location in the heart of the Sanlitun commercial district.

Craft brewers say that their venues are increasingly packed with locals, as opposed to a few years ago, when their clienteles were made up primarily of people from other countries.

Three of Beijing’s most well-known craft breweries — Great Leap, Slow Boat and Jing-A — all say that 80% to 90% of drinkers at their bars are Chinese now.

“We had more and more Chinese customers that were brought by their foreign friends,” Great Leap co-founder Liu Fang said.

How to pique the interest of Chinese customers new to craft beer that came through the door has been a key challenge. One of the most common ways brewers have tried to do this is by incorporating Chinese elements into their products.

Beijing’s Great Leap Brewing has used ingredients such as chrysanthemum tea or Sichuan’s tongue-numbing peppercorns, and has also used names with cultural significance, such as a collection of India pale ales that honor historical Chinese generals.

“From the beginning of us setting up Great Leap, we have always wanted to center our brand on Chinese ingredients, Chinese stories, Chinese historical figures, and Chinese background,” Liu said.

A representative of Nanjing-based brewery Master Gao — a pioneering brewery that has used Chinese-inspired ingredients such as jasmine tea and sweet potatoes in its beer — told Caixin through e-mail that the development of the Chinese craft beer market will be based on “Chinese people’s self-confidence in traditional culture.”

For Jing-A, this even meant going back many, many years ― 5,000, more or less ― to experiment with ancient Chinese brewing techniques. Research in Northwest China by the Shaanxi Provincial Institute of Archaeology in 2006 and Stanford University archaeologists in 2015 unearthed a primitive brewery and ancient brewing recipe dating back to the Neolithic era. Acker said he traveled to the city of Xi’an in 2017 to witness the findings firsthand and to incorporate the techniques and ingredients into Jing-A’s beers.

While breweries might have found ways to appeal to people that came through the doors of their bars, keeping the doors open has proved to be yet another challenge.

Jurinka lamented that Slowboat has had two locations shut down by “forces outside of our control,” including its first taproom. In May, Great Leap announced the closure of its flagship brewpub due to the landlord’s decision to deny rent to tenants in food or beverage services. Jing-A has also faced having to close down their first brewpub three years after its opening in 2014.

Despite the difficulty of finding a permanent home in China’s ever-changing cities, microbreweries aim to continue their brick-and-mortar expansions.

Acker said Jing-A’s plans to open up another taproom as soon as possible “could come before the end of the year, but on the other hand, we’re picky about great space and will take our time if we need to.”

Jurinka, while explaining that Slow Boat will build more locations both inside and outside Beijing in the future, said that there is no rush. “There’s a lot of private equity pushing the industry to expand faster than it should,” but “sustainable growth is the key.”

Beyond their brewpub origins, craft beer is increasingly found in stores’ chiller cabinets and on tap in restaurants. Master Gao, which was one of China’s first craft breweries when it was founded in 2008, was also one of the first to venture outside the bar.

Besides bars in several cities, a Master Gao told Caixin that its brightly colored cans are available in over 1,000 stores, partnering with supermarkets, convenience stores and online retailers, including Alibaba’s Tmall, JD.com and 7-Eleven.

While Slow Boat beer can be found in some select, higher-end supermarkets — as well as in hotels, restaurants and other bars — Jurinka said that one of the only reasons why Slow Boat and many other brands have yet to appear in more mainstream stores is simply because many supermarkets do not provide cold storage.

Keeping beer cold is necessary to slow the degradation that starts the moment the beer leaves the brewery, but most Chinese supermarkets store all their beer at room temperature — a cost-saving measure that’s an issue with craft brewers, who charge more for their premium product.

“As cold storage and refrigerated-beer sales become more common, so will the availability of craft beer in our neighborhood stores,” Jurinka told Caixin. He added that in turn, “as more people are introduced to craft beer, interest will grow, and supermarkets will offer more shelf space to satisfy demand.”

Besides the bottles, kegs of Beijing’s craft beer are sent around the country and beyond, with most of Slow Boat’s beer sold in provinces besides the capital and 50% growth in out-of-town sales expected this year. Jing-A sells in 20 cities in China and this year joined Master Gao in exporting beer to the U.S.

Let’s have a party

Another way China’s craft brewers are working to raise the profile of the Middle Kingdom’s nascent scene is through festivals, which forge links between brewers across borders.

For the past four years, Great Leap has put on the three-day-long Beijing Invitational Craft Beer Festival that in featured 39 breweries from 15 different countries and boasted over 200 beers for visitors to sample.

Last year, Jing-A held its inaugural 8x8 Brewing Project, a collaborative brewing festival that pairs eight Chinese breweries with eight breweries from a chosen region around the world. Each pair creates a brand new beer that is unveiled during the festival. The festival attracted 1,600 people in total, and the second event will be held late this October.

Master Gao, which has been holding beer festivals since 2012, has also explored that classic combination — beer and music. The brewery has held the BeeRock Rock & Roll Beer Festival and sponsored the national tour of Nanjing-based folk rocker Li Zhi. “The purpose (of the sponsorship) was to broaden our influence among young people,” the brewery said.

“I think the future for craft beer is very bright in China,” Acker said. “I think we’re just getting started. I think Chinese people are just waking up to the joys of better beer.”