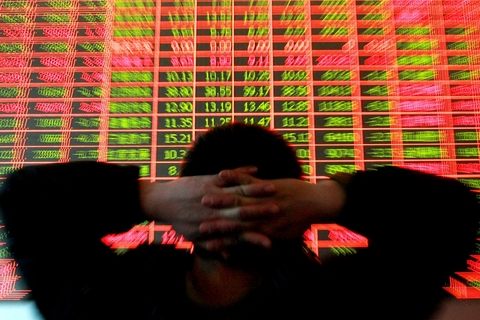 The International Monetary Fund pointed out on Wednesday that short-term and medium-term risks in the global financial system remain high.

Last week’s stock market crash in the U.S., which spread to Europe and Asia, brought back memories of October 1987’s Black Monday and the collapse of Lehman Brothers 10 years ago.

China has not been immune to the carnage. On Thursday, the Shanghai and Shenzhen stock markets opened significantly lower, with nearly 1,000 stocks falling. By market close, the Shanghai Composite Index was down 5.22%. Foreign capital has continued to flow out. Caixin data show that net sales of mainland-Hong Kong stock connect shares reached their highest level last week since the opening of the Shenzhen-Hong Kong Stock Connect in 2016.

The popular explanation is that the market has been dragged down by the U.S. Federal Reserve’s recent interest rate increase and the U.S. stock market decline. But there are two other factors that cannot be ignored.

The first is that, in the decade of recovery and expansion since the global financial crisis, new vulnerabilities have been accumulating and are currently being tested. The International Monetary Fund pointed out on Wednesday that short-term and medium-term risks in the global financial system remain high.

The second factor is the escalation of trade friction between China and the U.S., which has caused great uncertainty for the global economy. Global economic growth is expected to slow, and investors and businesses are anxious. What should policymakers do to avoid creating self-fulfilling pessimism?

In times like this, it is necessary for monetary authorities to communicate with the market in a timely manner and send positive signals. Yi Gang, governor of the People’s Bank of China, sent such a signal at the International Monetary Fund’s annual meeting in Bali this week. China has already achieved results in stabilizing leverage and controlling financial risks and is on track to meeting growth targets, Yi told Caixin reporters in Bali.

Previously, the central bank said it would reduce the reserve requirement ratio for banks by 1 percentage point starting Oct. 15 to offset maturing medium-term loan facilities and provide the market with the funds needed for economic growth.

But “reducing the requirement is only one aspect of solving the problem, and there is still a lot of other work to be done,” Yu Yongding, director of the Institute of World Economics and Politics at the Chinese Academy of Social Sciences, told Caixin.

Considering the low likelihood that the U.S.-China trade conflict will be resolved in the near future, China will face an inevitable hit to external demand. Greater dependence on domestic demand is China’s only way out.

To tap the potential of domestic demand, China must promote the key reforms proposed by Liu Shijin, member of the central bank’s monetary policy committee: accelerating the breakup of administrative monopolies while reducing the five basic costs of land, energy, communications, logistics and financing; pushing forward tax cuts and tax reform; deepening the reform of state-owned enterprises through the management of capital; speeding up rural land reforms; and accelerating the opening-up of knowledge-intensive service industries. The implication is that, if these reforms can be effectively implemented, they will naturally lead the Chinese economy toward high-quality development.

High-quality development also requires the further optimization of China’s economic structure. Yi mentioned positive changes in this area in the Bali interview with Caixin — specifically, that the proportion of domestic demand attributable to the service industries is constantly increasing.

However, we should also be aware of hidden problems. For instance, the increase in domestic demand originating in services is caused mainly by the rapid growth of the wholesale and retail industries and the expansion of the financial services industry. The expansion of wholesale and retail is due mainly to the adoption of internet technology, while the financial industry has to some extent expanded beyond its intended role of supporting the real economy and is vulnerable to bubbles.

The service industries that still need rapid development are health care, education and culture — knowledge-intensive industries that correlate with manufacturing and household consumption upgrades. Within the context of the trade war, advances in these areas will help consolidate domestic demand and redefine China’s position in the global value chain.

High-quality development also means economic growth that is less dependent on high leverage. China’s macroeconomic leverage ratio has stabilized over the past year, as Yi told Caixin. The Chinese economy is now facing downward pressure and can no longer withstand drastic measures to reduce leverage. But policymakers should also protect the country’s hard-won stabilization of the leverage ratio and maintain a stable and neutral monetary policy.

Investors frequently believe that governments will shoulder the burden in times of crisis. But in fact, while supervisory authorities are responsible for maintaining financial stability and preventing systemic risks, those who have not been cautious and who have been overly optimistic must pay for their own mistakes. The true focus of policymakers should be on issues conducive to long-term, steady growth.