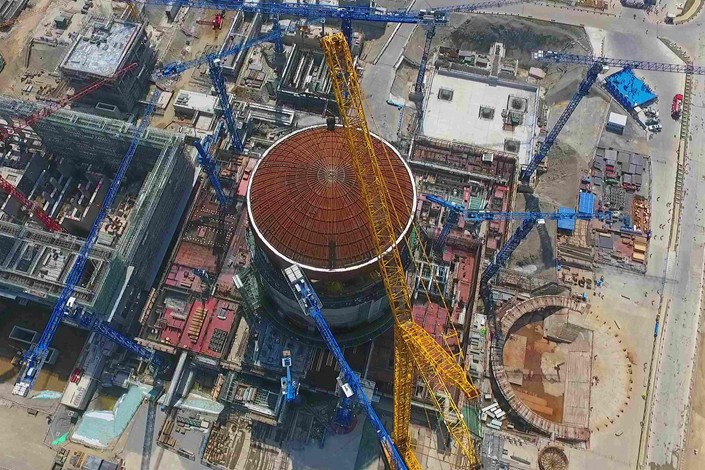 The dome is installed at the No. 3 unit of the Fangchenggang Nuclear Power Plant, a demonstration nuclear power project using Hualong One technology, in Fangchenggang, the Guangxi Zhuang autonomous region, on May 23. Photo: VCG

State-owned nuclear giant China General Nuclear Group Corp. (CGN) said that its plans to develop an advanced type of nuclear reactor in the U.K. will not be hindered by the U.S. government’s move to tighten restrictions of the sale of nuclear components.

On Thursday, the U.S. Department of Energy announced that it will conduct more stringent reviews of Chinese applications for U.S. civil nuclear technology due to security concerns. The announcement singled out CGN, saying that there will be a “presumption of denial” for the company, although it did not provide details of the company’s alleged offenses.

CGN responded to the announcement with a statement of its own on Saturday, saying that it does not know what facts the U.S. based its argument on, and that its efforts “to promote new nuclear projects in the U.K. would not be affected” by the decision, as they do not rely on U.S. technology.

CGN and its state-owned peer, China National Nuclear Power Co. Ltd., have signed contracts with the U.K. government to develop a new nuclear reactor at Maldon in England’s southeastern county of Essex. The project will make use of China’s domestically developed advanced Hualong One reactor, the first instance of a Chinese-designed reactor being used in the West.

CGN has also secured a 33.5% stake in the U.K.’s planned $26 billion Hinkley Point C nuclear power station in southwestern England’s Somerset county. While Prime Minister Theresa May postponed the signing of the Hinkley deal while conducting a review of potential national security concerns, it was finalized in September 2016.

U.S. nuclear component sales to China only came to around $170 million last year, according to Reuters, and so the new restrictions are unlikely to be a major hindrance to Chinese nuclear companies.

With 40 existing nuclear reactors, China has the world’s largest installed nuclear capacity, according to the World Nuclear Association. The country has another 20 under construction or about to start construction.