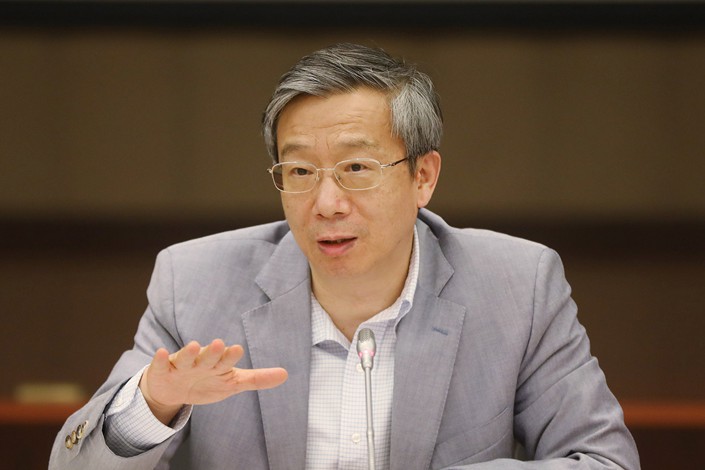 People’s Bank of China Governor Yi Gang said the PBOC won’t introduce special policies to promote the use of the yuan globally, which he said should be a market-driven process. Photo: VCG

* Central bank chief says China is preparing for the worst but hopes a constructive solution can be found to the trade dispute with the U.S.

* Yi said China’s current monetary policy remains stable and neutral, and is “neither relaxed nor tight”

(Beijing) — China’s influence as the world’s second-largest economy means the words of its top economic and financial officials matter. Yi Gang, governor of the People’s Bank of China (PBOC), laid out his views on a range of issues — including trade friction with the U.S., China’s monetary policy and yuan internationalization — at the International Monetary Fund (IMF) and World Bank’s meetings in the Indonesian province of Bali over the weekend.

Here are five key issues addressed by Yi on Sunday in a speech and follow-up Q&A at an international banking seminar of the Group of 30, a group comprising academic economists and representatives of national, regional, and central banks, on the sidelines of the main IMF meetings.

China and the U.S. are embroiled in a trade war that has already led the two countries to impose tariffs on each other’s exports, and seen Washington tighten controls on Chinese mergers and acquisitions in the country. The IMF last week warned that the dispute could hurt global growth, increase uncertainty, dent business confidence and fuel financial market volatility.

Yi said escalating trade friction brings “huge downside risks” to the global economy. The IMF’s modeling and the PBOC’s own internal simulations have reached similar conclusions in forecasting a negative impact on the world’s major economies. Trade tensions “will cause many problems, leading to negative expectations and uncertainty which will create nervousness in the markets, something the market doesn’t like.”

Yi said China is preparing for the worst but hopes a constructive solution can be found to the trade dispute with the U.S., noting that there are no winners in a trade war. China will continue to follow the principles of advocating for a rules-based multilateral system that supports globalization, comparative advantage, and free trade.

Yi said too little attention was given to China’s trade deficit with the U.S. in terms of services, currently running at around $40 billion a year. The U.S.’ exports of services to China have grown by around 20% a year over the past few years, he said, pointing to a huge inflow of money into the U.S. from the Chinese students who go there to study. China also paid around $29 billion to the rest of the world in fees for intellectual property rights, a large percentage of which goes to the U.S.

Asked about China’s room to adjust policy to deal with the risk stemming from trade friction, Yi said the PBOC has considerable room to use a range of monetary policy tools, including interest rates, bank reserve requirement ratios, and adjustments to monetary conditions.

“Considering that the Fed is raising interest rates, China’s interest rate is appropriate. The above-mentioned tools are sufficient to deal with uncertainty.”

Yi pointed out that 45% of the country’s exports are made by foreign-funded enterprises, and almost 45% by privately owned companies, with just 10% coming from state-owned enterprises. The impact on the economy of tariffs and trade friction can be deduced from those numbers, he said.

Yi said China’s economic growth is currently stable, and it is expected to achieve its target expansion this year of 6.5%, or possibly slightly higher. Inflation is benign, corporate profits have increased, and taxes and wages are also at a good level. Domestic consumption has become the main driver of growth.

In order to solve structural problems in the economy, China will accelerate domestic reform and opening-up, and strengthen intellectual property protection, Yi said.

Yi noted concerns that the PBOC is relaxing its monetary policy stance, after the central bank on Oct. 7 announced the fourth cut in banks’ reserve requirement ratios (RRR) this year, releasing more than $100 billion of liquidity into the banking system.

China’s 10-year government bond yields have declined, from 4% at the beginning of the year to 3.6%, while the seven-day reverse repo rate has also fallen.

But Yi said China’s current monetary policy remains stable and neutral, and is “neither relaxed nor tight.”

“If you look at the broader M2 money supply, the growth rate has stabilized at around 8%, which is in line with the nominal growth in gross domestic product. Total social financing (TSF) is now rising at about 10%, which is also at a reasonable level,” Yi said. “Based on the above factors, we can conclude that China’s monetary policy maintains a stable and neutral nature.”

For the past two years, Chinese authorities have introduced a series of policies aimed at reducing leverage in the economy, especially the growing debts of companies and local governments.

The PBOC won’t introduce special policies to promote the use of the yuan globally, which should be a market-driven process, Yi said. Recent progress in the internationalization of the Chinese currency stems from the inclusion of Chinese bonds and stocks into global indexes, such as the MSCI Index and the FTSE Russell Index, which has led investors to increase the allocation of assets into yuan-denominated assets. Yi said he wants to see a level playing field in the markets where participants have the freedom to choose which currencies they want to hold.