Zhang Chunlin: ‘Competitive Neutrality’ for SOEs Can Help China At Home and Abroad 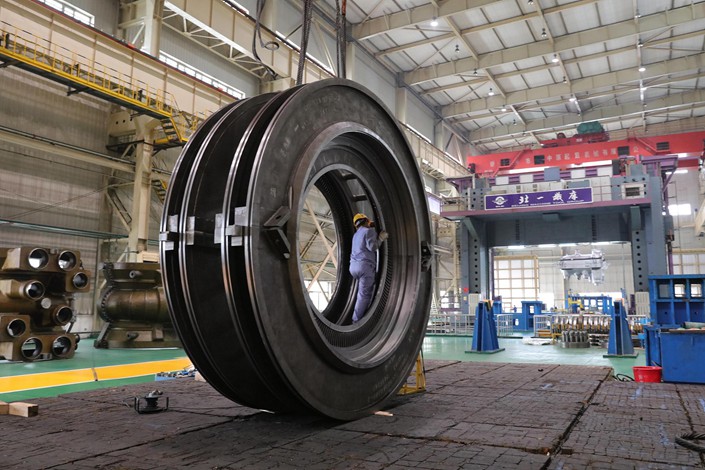 An employee works at the state-owned enterprise Harbin Electric Group Co. Ltd. in the northeastern city of Harbin on April 20. Photo: VCG

* However, creating a level playing field between state enterprises and private companies in areas like debt financing will require further reforms of the financial system

Editor’s note: China’s current trade tensions with the U.S. are driven in part by perceptions of its unfair support for state-owned enterprises (SOEs). Yi Gang, the governor of the People’s Bank of China, told a meeting of the Group of 30 on Sunday that China is considering adopting the principle of competitive neutrality to create a level playing field between state-owned enterprises and private companies. On Monday, Peng Huagang, deputy head of the State-owned Assets Supervision and Administration Commission, also raised the principle of competitive neutrality when he spoke out against what he described as discrimination restrictions imposed on Chinese SOEs abroad.

How can we create a level playing field so that private enterprises can compete on an equal footing with state-owned enterprises?

Broadly speaking there are two ways. The first is to ensure that SOEs do not use the power of the state to strengthen their own competitive advantage. The second is to ensure that even though SOEs have the state as a shareholder they act, in other respects, as independent commercial entities when it comes to market competition. This can be done by separating government from the enterprise.

Addressing the first issue, one option would be to accept the principle of competitive neutrality advocated by the Organization for Economic Cooperation and Development (OECD), a club of mostly wealthy countries. The essence of this principle is that all actions taken by the government have a neutral effect on competition between private and state-owned enterprises. In other words, government actions do not give any inappropriate competitive advantage to any current or potential market participants, especially SOEs.

China could come up with a solution of its own, devising and implementing a program that would guarantee competitive neutrality based on the country’s own conditions.

Competitive neutrality was first proposed by the Australian government in 1996, which defined the principle as “requiring that government business activities should not enjoy net competitive advantages over their private sector competitors simply by virtue of public sector ownership.” From 2011, the OECD published a series of reports promoting the concept and providing a more concrete definition.

What can governments do to achieve competitive neutrality? One OECD report (Capobianco and Christiansen, 2011) proposed eight elements, which can be broadly summarized into four points:

1.When SOEs assume responsibility for public services or public policy, they should be given fair and transparent compensation for the cost. Excessive compensation amounts to a subsidy and can give SOEs an inappropriate competitive advantage. Of course, insufficient compensation, or the lack of regulation or transparency, can also affect SOEs’ normal operations, weaken corporate governance, and provide excuses for inefficient enterprises. So to guarantee fairness and transparency, the commercial operations of SOEs should be separated as much as possible from their responsibilities for public services or public policy — at a minimum by having separate accounts.

3.SOEs should not enjoy any implicit or explicit state guarantees when issuing debt. A key point is that if government financing vehicles support the continued existence of SOEs that cannot pay back maturing loans and keep them alive rather than letting them go bankrupt, then this is tantamount to an implicit guarantee, and exemption from debt repayment is equivalent to a subsidy.

4.As a shareholder in an SOE, the state should require the same rate of return as it would get on a commercial investment. Failure to make such a demand lowers an SOE’s cost of equity financing and strengthens their ability to withstand losses or low rates of return, thus allowing them more room to raise or lower prices in order to compete with other companies. The losses this might inflict on the state will ultimately have to be recouped from the public through taxation or other forms of income. Therefore injecting state capital into SOEs while not demanding a commercial rate of return is in fact a form of subsidy.

The principle of competitive neutrality isn’t dissimilar to China’s own SOE reform proposals — both reaffirm the need to guarantee a level playing field between private and state-owned companies. Accepting this principle in domestic and international markets will be conducive to helping China in its negotiations with its trading partners.

But competitive neutrality is so far just a principle proposed by the OECD. It is not legally binding, and I have not seen any country turn it into a set of detailed rules that can be implemented. The large and unique nature of China’s SOE sector means that achieving competitive neutrality will need to be done by taking into account the country’s own individual circumstances. Rather than reacting in response to trading partners’ complaints, China should be proactive and propose its own solution, a program to implement competitive neutrality. Internationally this could become a basis for communication and negotiation with trading partners, while domestically it could become a guide to ensure fair competition between SOEs and private companies.

Further dedicated research is needed to formulate the specific details for such a program. But China’s Fair Competition Review System, currently being implemented, could be a foundation. In the search for a mutually acceptable arrangement with China’s major trading partners, one can look to the regulations on SOEs in Chapter 17 of the Trans-Pacific Partnership (TPP), certain promises China made when it joined the World Trade Organization (WTO), and other requests from its major trading partners.

The TPP has, so far, the most detailed regulations on SOEs of any free trade agreement, reflecting the key demands of the U.S. at the time. Its spirit, the principle of competitive neutrality and related WTO regulations all stem from the same source. But many of the TPP’s rules leave much room for interpretation. Consequently it’s crucial that China proposes its own interpretation of these universally accepted principles, and how it would implement them.

Of course, proposing such a plan is not an end in itself. Implementation is key, and carrying out these reforms will be extremely difficult. For example, creating a level playing field between SOEs and private companies in debt financing requires further reform of the financial system, and the harmonization of competition policy and industrial policy will involve cleaning up anti-competitive industrial policies. But we have reached a point today where these reforms are both urgent and necessary.