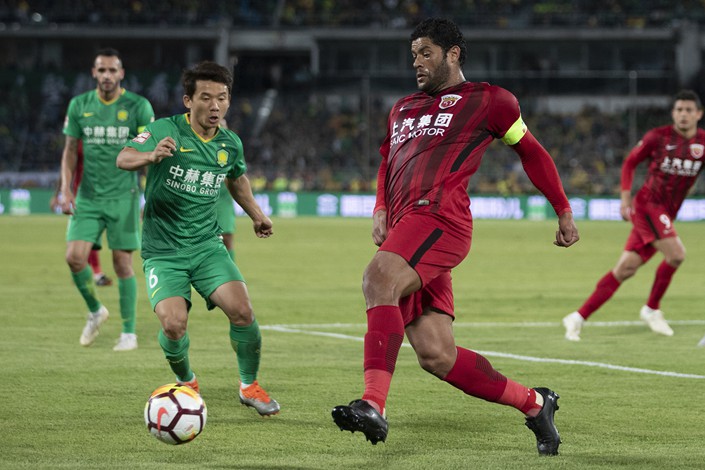 If the China Football Association (CFA) puts the caps in place, they will affect both the Chinese Super League and the second-tier League A and will crack down on “signing bonuses, yin-yang contracts and other tax-evading behavior,” the official Xinhua News Agency reported.

A so-called yin-yang contract describes a common tax-evasion practice involving two contracts in which a second contract of lower value is declared to authorities.

The proposed caps come after only a few years of unfettered soccer spending spurred by Chinese President Xi Jinping’s wish for China to become a world soccer superpower by 2050. In 2015, the powerful Central Leading Group for Comprehensively Deepening Reform — the since-renamed Politburo-level body responsible for setting the tone for China’s major social, political and economic reform programs — passed a 50-point plan to overhaul China’s soccer management. Though the Chinese men’s national team has qualified for the FIFA World Cup only once, in 2002, then-Vice President Xi in 2011 expressed his desire for China to win the trophy one day.

The 2015 announcement spurred a jump in spending and investment, both domestically and overseas, in everything soccer. In 2016, the government announced that it planned to build 70,000 public soccer fields (link in Chinese) by 2020, up from the 10,000 serviceable fields China had at the end of 2013. A CFA announcement that it will invest heavily in developing youth soccer education led to soccer academies opening around the country, many of them partnerships with top-tier Spanish club FC Barcelona.

However, the spending did not go unnoticed by Chinese authorities. In a 2016 editorial titled “The Soccer Industry’s ‘Hot Development’ Needs More Endurance,” the official People’s Daily warned that the high-profile growth in Chinese investment both in China and overseas had all the markings of a bubble. In 2017, the General Administration of Sport, China’s top sport authority, called for restraint on spending on foreign clubs and foreign talent.

The new caps will come in addition to the “transfer tax” introduced in the summer of 2017, which imposed a 100% tax on transfer fees over 45 million yuan ($6.51 million).

The Xinhua report did not give any figures for the spending caps, nor did it detail how they will affect investment into overseas and domestic clubs. In 2017, a Chinese-owned consortium purchased legendary Italian club A.C. Milan, reportedly for $788 million, a deal which fell apart in July 2018. The murky finances of the new owner Li Yonghong led some to believe that Chinese businesses were using the government’s push for soccer excellence in order to move money out of China.

According to Xinhua, the CFA is now seeking the opinions of professional clubs on the draft rules. The final rules will be announced at the end of this season.