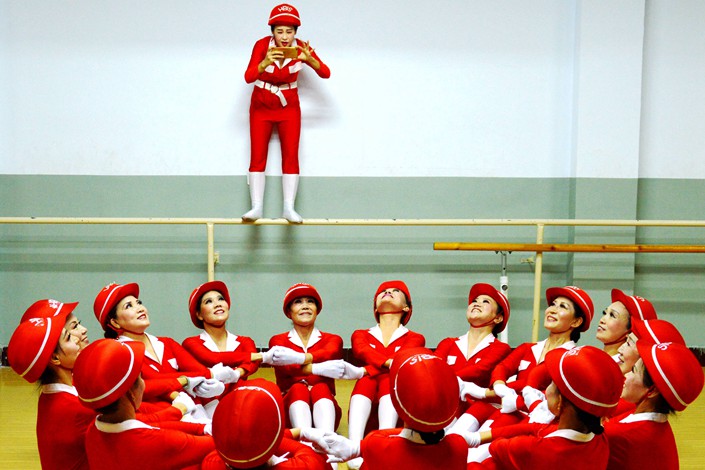 Members of a senior citizens’ dance team pose for a photo after attending a gala in Handan, Hebei province, on Saturday. Photo: VCG

A forum on China’s aging society said that the country is failing to prepare for the rapid graying of its population, especially when it comes to the country’s welfare and health care systems.

A statement issued Wednesday after the latest meeting of the Aging Society Forum of 30 said “that the range and scale of aging has increased in speed and degree,” and that China will need to make policy adjustments to address, among other things, “age discrimination, intergenerational conflict, imbalances in supply and demand, and development constraints.”

The forum was founded earlier this year by think tanks and universities.

“By the end of this year, over 250 million people will be over the age of 60,” said Yuan Xin, director of the Nankai University Aging Development Strategy Research Center. “For the next few years, the number of elderly people will grow by millions annually, indicating that each year, fewer and fewer people will be contributing to social welfare that will have to be shared across a greater number of recipients.”

Related to the aging process, China's pension industry is facing severe challenges as the amount now saved by the Chinese population for retirement is nowhere near enough to cover the projected cost.

Xu Yongguang, chairman of the Narada Foundation, a private foundation whose work includes supplying resources and funds to the public welfare industry chain, said that government investment into public nursing homes has stymied the development of the private nursing-home market.

“Public nursing homes should be aimed at the disadvantaged or mentally ill elderly population, providing a base level of strong support,” he said. “However, public nursing homes now are competing in the market, so while it’s hard to get a bed at a public home, there are many empty beds at private homes.”

In addition, many elderly people are disabled, and therefore require specialized services. According to statistics from the China Disabled Persons’ Federation, by the end of 2017, there were 34 million people with disabilities in China, of whom 41% were over the age of 60. However, that number does not include elderly citizens who have not been certified as disabled by the government and thus cannot access social insurance or health care programs for disabled citizens.

Yuan Ruijun, an associate professor at the School of Government at Peking University, believes that China’s biggest problem is that it did not become rich before becoming old. Other countries have reached a gross domestic product (GDP) per capita of 20,000 yuan ($2,890) before becoming an aging society, she said. However, China's GDP per capita now is only about 8,000 yuan.

Yuan Xin, of Tianjin’s Nankai University, pointed out that the current lack of awareness and inaccurate judgment of the issue has led to the belated development of coping systems. Proper management in the future will need to involve the government, market, family, and individual. The government should act as rule-maker and supervisor and also play a role to support diseased, disabled, and low-income people.

“Since the process is irreversible, only economic and social development can be used to respond to an aging population,” Yuan Xin said.