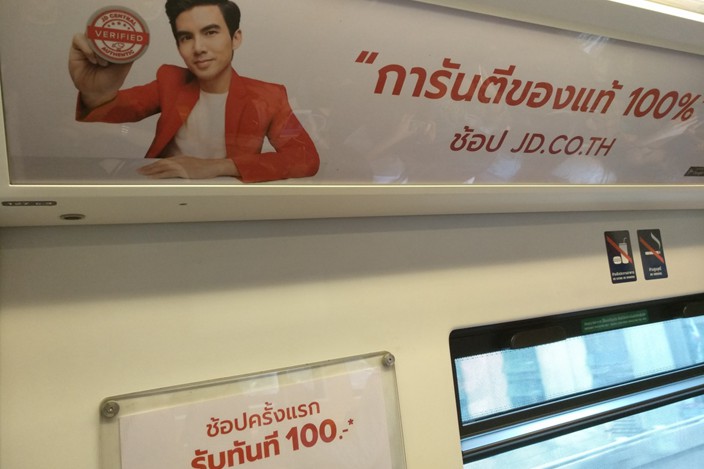 JD.com Inc. is aiming to replicate its success in Southeast Asia in Thailand, its third market after Indonesia and Vietnam, as Chinese online behemoths eye the region as open territory for their next e-commerce incursion.

China’s No. 2 e-commerce operator has joined hands with Central Group, Thailand’s largest retailer — whose CentralWorld megamall in downtown Bangkok is a shopping haven to many. The pair officially unveiled a local e-commerce portal, JD Central, in late-September.

JD and archrival Alibaba Group Holdings Ltd. have found major success in China, where the two control the vast majority of their home market, whose business-to-consumer (B2C) online shopping sales hit 3.6 trillion yuan ($519.3 billion) in 2017, according to iResearch. But they have had far less success outside, especially in the ultra-competitive West.

In a nod to that fact, the pair and many Chinese high-tech peers have turned their attention to developing markets as a place to take baby steps onto the global stage. Southeast Asia and India have emerged as two of their favorite testing grounds.

JD’s move into Thailand followed similar launches in Indonesia and Vietnam, though it hasn’t been free of hiccups judging from comments posted by some Thai shoppers on JD Central’s Facebook page.

“I ordered a pair of shoes with a ‘S’ size but a larger one came to me,” wrote Kanokjun Borripautmongkol, adding that she has been contacting customer service for more than two weeks but the right shoes have yet to arrive. Others have complained of misdelivered orders and poor online customer support, such as a 45-day wait for a refund from a credit card purchase.

For its part, JD.com vowed to forge ahead.

A February report by consultancy Frost & Sullivan said Southeast Asia’s (B2C) e-commerce market surpassed the $6 billion mark in the fourth quarter of 2017, a surge of 28.5% quarter-on-quarter. By comparison, JD.com reported $63 billion in online spending on its platforms in its latest reporting quarter. Of course, China has more than double the population of Southeast Asia and JD.com controls about a quarter of the local B2C market.

Thailand is typical of the region, with market watchers estimating online shopping accounts for just 3% of retail spending nationwide.

“Thailand is increasingly seen as a strategic hub with its geographical proximity to China and easy land access to Malaysia, Vietnam, Myanmar, Cambodia and Laos,” said a report by ecommerceIQ, a Bangkok-based market researcher on Southeast Asian e-commerce. “This has led to strategic investments by Alibaba and JD.com in Thailand.”

Alibaba has also invested heavily in payment and e-commerce ventures in Thailand, Singapore, Indonesia and Malaysia, while U.S. juggernaut Amazon.com Inc. took Singapore as its first stop with a presence since 2017.

The Thai e-commerce space is currently dominated by a duopoly — Alibaba-backed Lazada Group SA, and Shopee, a unit of Singapore-based Sea Ltd., which counts Tencent Holdings Ltd. among its investors and was floated in New York last year. Both operate across Southeast Asia. One of Lazada’s main focuses is electronics while Shopee is more focused on beauty products and clothing.

JD Central’s follows the formation of a $500 million, 50-50 joint venture last year between the pair of companies. JD.com is providing its technology and logistics support to the venture, while Central is contributing local know-how.

JD.com’s Thailand launch follows its move into Indonesia two years ago through a local subsidiary. It moved into Vietnam this year when it backed local e-commerce firm Tiki.vn.

In addition to the online presence, JD.com is considering setting up one of its unmanned stores in the Thai capital. In August, JD opened its first such overseas store in a shopping mall in Jakarta, selling clothing, beauty products and groceries. In China, its first cashier-less store debuted inside its Beijing headquarters in October. The company now operates over 20 such stores across China.

JD Central has the potential to topple Lazada’s dominance if it lives up to its commitment of providing consumer peace of mind with 100% authentic goods and offering them a unique customer experience, said Baseer Ahmad Siddiqui, a Kuala Lumpur-based ASEAN software analyst for market research IDC.

Lazada, like its backer Alibaba, currently battles knock-offs on its marketplace, because it’s an open platform where any retailer can sell goods, he said. Lazada is now working hard to tie up directly with authentic branded stores online.

“JD Central may do acquisitions of smaller marketplaces to expedite their customer acquisition, as challenging Lazada’s position as a market leader needs very effective market penetration and customer retention strategy,” he told Caixin.