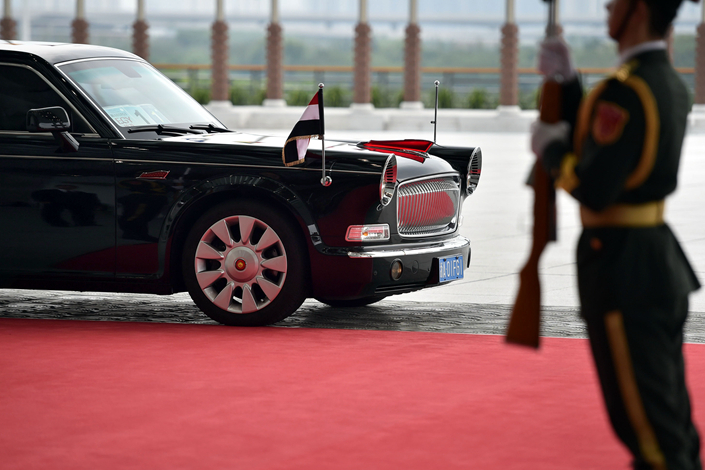 Jilin-based FAW is the builder of the Red Flag limousine for China’s top leaders. Photo: VCG

* Although credit-line agreements don’t necessarily lead to actual borrowing, it is rare for lenders to move in concert to grant such a massive credit package to a company

* China’s auto market, the world’s largest, is expected to experience its first annual contraction after rapid growth for at least two decades

State-owned automaker FAW Group Corp. secured record credit backing from domestic lenders amid China’s repeated calls to increase financial support to the real economy, though the emphasis has been on aiding the private sector.

China’s top authorities in recent months have pushed banks to lend more money to support business, especially the private sector, as a deepening trade row with the U.S. threatens to exacerbate a slowdown in economic growth.

China’s auto market, the world’s largest, is expected to experience its first annual contraction after rapid growth for at least two decades. Major domestic automakers have forecast significant profit drops over the first three quarters of the year. Last week, FAW Car, a Shenzhen-listed sedan unit of FAW, projected a profit drop of around 60% to at most 115 million yuan for the period, citing sluggish sales and rising production costs.

FAW will cooperate with the banks in business areas including capital management, international financial services, new-energy vehicles, the internet of things, as well as the development of the Red Flag, or Hongqi, brand, the automaker said.

Although credit-line agreements don’t necessarily lead to actual borrowing, it is rare for lenders to move in concert to grant such a massive credit package to a company.

In December 2017, private conglomerate HNA Group said it secured 800 billion yuan of credit lines from eight banks led by the CDB to support its efforts to reduce debt after years of aggressive global expansion.

Established in 1953, FAW is China’s oldest automaker. The company has set up joint ventures with global brands including Volkswagen, Audi, Toyota and Mazda. In 2017, FAW reported 3.3 million car sales, making it the country’s third-largest automaker after SAIC Motor and Dongfeng Motor Corp.

The partnership with banks is a key part of FAW’s strategy to “create an open and innovative financial platform,” FAW said Wednesday. The company didn’t elaborate on the strategy, but an April regulation issued by top financial regulators will put non-financial companies’ expansion into the financial sector under closer scrutiny.

Caixin learned that separately from the partnership with FAW, several banks have also promised financing support to Jilin, a rust-belt province in northeast China that has been suffering from declining investment and growth.