By Liang Zhen and Tang Ziyi 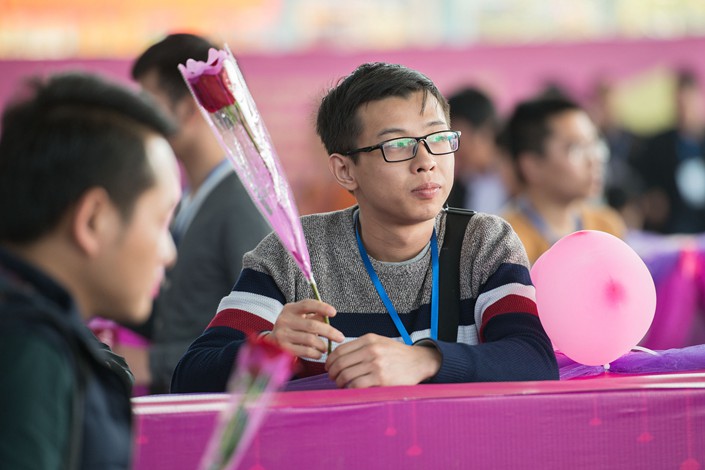 A man seeks his match at 3,000-person singles party in the southern city of Dongguan in January 2017. Photo: VCG

(Beijing) — Despite recent measures to loosen China’s family planning policies, experts speaking at a recent conference said that the gender imbalance caused by decades of enforcing birth restrictions will last for years to come.

“The impact of current policies on people’s fertility decisions is weak compared to the 1980s and 1990s, and the economic and social impacts are more pronounced,” said Liu Hongyan, deputy director of the China Population and Development Research Center.

“If [the government] loosened its fertility policy in the 1980s, the problem of sex ratio at birth in China may have been resolved by now. But I believe that in the long run, the relaxation of the birth policy will help soothe China’s gender issues,” Liu said at a conference on gender selection in Belt and Road Initiative countries organized by the research center and the United Nations Population Fund (UNPF).

This imbalance is a consequence of China’s one-child policy, which began in the early 1980s. Due to a preference for boys, many couples aborted female fetuses. In 2015, the government announced all married couples would be allowed to have two children.

However, following the end of the one-child policy, there “is no data yet that shows that the sex selection ratio is rising or decreasing,” Liu said.

“The traditional concept of valuing men more than women is still persistent … we still have a serious problem in managing the gender ratio of the birth population,” said Cai Fei, director of the National Health Commission’s aging health department.

Decades of a severely skewed birth ratio led to the country having 60 million more men than women in 2012, according to data the UNPF released at the conference. The UNPF also said that there would be 1.5 times more men of marriageable age in the country than women by 2030.

Liu said that further legislation to fight gender discrimination is necessary, as women are facing difficulty finding employment since the loosening of birth restrictions as employers are unwilling to hire women who might take maternity leave twice.

In September, the authorities changed the names of three departments that had “family planning” in their descriptions to “population monitoring and family development” departments, raising speculation that all birth restrictions may be eliminated in the near future.