In Depth: The Multibillion-Dollar Black Hole of a State Fuel Trader 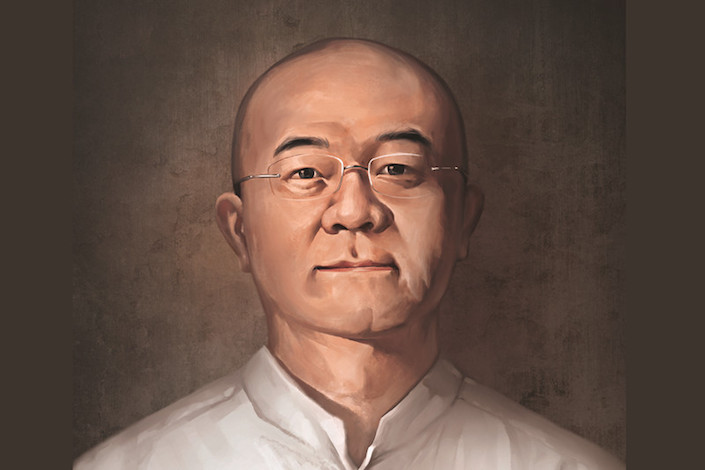 * Guangdong Zhenrong defaulted on 21.5 billion yuan of loans to more than 20 banks as of April 2017, with billions of yuan disappearing from its books

In just four years, Chairman Xiong Shaohui saw his ambition come true as Guangdong Zhenrong Energy, a state-backed fuel trader, expanded annual revenue nine-fold to become one of China’s largest players in the global energy market. But it took even less time to prove that the colossus was just a castle built on sand.

Guangdong Zhenrong, a subsidiary of China’s once military-backed commodity giant Zhuhai Zhenrong Group, described itself as a “pivotal enterprise to China’s military and national energy industry” with business “worth hundreds of billions of yuan,” according to a company document seen by Caixin.

But to many of the country’s biggest banks, Guangdong Zhenrong has become a black hole soaking up billions of dollars of debts that the banks probably will have no way to recover.

As of April 2017, Guangdong Zhenrong had defaulted on 21.5 billion yuan ($3.1 billion) of bank loans, with 18.8 billion yuan vanishing from its books, an audit of the company found. Auditors determined that the company had no realizable assets, fabricated trade deals to get bank loans and left ever-growing bad loans, sources close to the matter told Caixin.

Guangdong Zhenrong’s debt crisis began unfolding in late 2014 when the company started to miss interest payments to banks. That was only one year after the company achieved Xiong’s goal of a tenfold increase in annual fuel trading revenue from 2009 to 105.2 billion yuan, making it the 185th-largest company in China.

But separate sources close to Guangdong Zhenrong said most of the trade deals that contributed to the surge in revenue since 2010 were faked, and the company used fabricated trade documents to obtain massive loans.

A Caixin investigation found that Guangdong Zhenrong set up a complicated business network with affiliated companies to arrange trade deals and obtain loans from banks, and cash flows among the companies have remained opaque.

A creditor told Caixin that capital has been transferred frequently among Guangdong Zhenrong’s affiliate companies in China and abroad in the form of bills of exchange, making it difficult to track the cash flow.

“So far, the auditors have been unable to clearly trace a single fund,” the creditor said.

A document obtained by Caixin showed that 30 financial institutions are demanding that Guangdong Zhenrong and its subsidiaries repay 16 billion yuan of loans and interest. There is an additional 13 billion yuan of potential obligations for debt guarantees.

A source from a creditor bank said Guangdong Zhenrong may also owe about 6 billion yuan to nonfinancial companies, not to mention the debts of its overseas subsidiaries in offshore markets.

As the audit unfolds, no formal allegations have been made against Guangdong Zhenrong and its executives. In September, Xiong proposed a plan to the parent company, Zhuahai Zhenrong, for a trip to Hong Kong and Dubai to meet potential partners for restructuring. But Xiong’s request was denied due to a lack of information about the potential investors and the plan. Chinese officials and state company executives usually need approval to travel abroad.

“There is no way for Guangdong Zhenrong to recover,” said an official at the parent company. “Financially, it is completely out of control.”

Guangdong Zhenrong was set up in 2002 as a natural gas unit of Zhuhai Zhenrong, which was founded by China’s military in 1994 to handle oil business with Iran. For many years, Zhuhai Zhenrong was one of China’s four largest oil importers. In a 2003 reform, Zhuhai Zhenrong cut its military ties to become one of the 196 state companies under the direct supervision of the State Council, China's cabinet.

Xiong, 52, was one of the founders of Guangdong Zhenrong and has since been the chairman and Communist Party chief of the unit. Before joining the company, he spent more than a decade as a bureaucrat in the former Ministry of Foreign Trade and Economic Cooperation.

Xiong is bold and boastful, people familiar with him said. He often proudly described Guangdong Zhenrong’s mission as “serving the national strategy.”


As part of a state sector reform in 2006, Guangdong Zhenrong spun off the civil natural gas business and focused on fuel trading. That year, Xiong took a risky step to import eight tankers of fuel oil from Iran although no buyer was confirmed. But the oil was successfully sold and Guangdong Zhenrong built its market foothold.

“Xiong has the hero syndrome ― he always wants to be the hero and the boss,” a person familiar with Xiong said. “He is good at strategy but not tactics. So he often built up a big framework but was unable to fill it up.”

While Guangdong Zhenrong struggles with its debt crisis, Xiong has insisted that the company can survive only with more investment and proposed even bigger plans to expand the company’s business in the Pacific and Indian Ocean areas, a parent-company official said.

In 2016, Guangdong Zhenrong made international headlines by proposing a $3 billion investment in Myanmar's largest oil refinery project and a multibillion dollar investment in an aging oil plant in Curacao in the Caribbean. But neither of those deals has gone through.

In a statement to Caixin, Xiong said pressure from banks, media reports, a lack of support from the parent company and hostile forces should be blamed for Guangdong Zhenrong’s situation.

In 2015, Zhuhai Zhenrong was merged into the Macau-based state-controlled conglomerate Nam Kwong Group as part of the State Council’s plan to consolidate state-owned enterprises.

“As China set up diverse oil-import sources and secured its energy supply, the mission of Zhuhai Zhenrong was completed,” said a former executive of the company.

Auditors raised questions about whether Guangdong Zhenrong’s surging trade volumes actually took place or were just a game of figures, as many of the documents it used to obtain trade financing had flaws, Caixin learned.

For instance, for an August 2013 loan from a branch of the Industrial and Commercial Bank of China (ICBC), Guangdong Zhenrong provided a copy of a bill of lading indicating the purchase of 43,995 metric tons (48,496 U.S. tons) of fuel oil by Sinopec (Hong Kong) Fuel Oil Co. from Korean oil company S-OIL. However, there was no documentation of how the deal was related to Guangdong Zhenrong, sources said. Sinopec Fuel Oil denied that it had such a deal with Guangdong Zhenrong.

Trading documents show that between 2010 and 2014, Guangdong Zhenrong secured around 80 billion yuan of credit as trade financing for its deals with Mercuria Energy. But whether or not the deals were real remains a question.

“All of Guangdong Zhenrong’s purchases from Mercuria Energy are in the form of intermediary trade, in which Guangdong Zhenrong handles goods transit between the seller and the final buyer, so there is no custom record for the goods,” said a person close to the company.

An official at the audit office said it is likely that Mercuria Energy sold trade information to Guangdong Zhenrong for financing purposes. Mercuria Energy declined Caixin’s request to comment on the matter.

After years-long defaults, 20 banks have sued Guangdong Zhenrong for unpaid debts, and three of Guangdong Zhenrong’s subsidiaries have entered bankruptcy proceedings. But most banks are exposed to huge losses as they had no collateral from Guangdong Zhenrong. Guangfa Bank and Guangdong Huaxing Bank are the only two with some gems pledged by Guangdong Zhenrong’s mining unit in Yunnan province. But Caixin learned that most of the gems can’t be sold on the market because they are deemed illegal assets as the Yunnan unit lacks a mining permit.

Caixin learned that ICBC and Bank of China are the biggest creditors of Guangdong Zhenrong, each with 5 billion yuan of unpaid loans. Everbright Bank has about 2 billion yuan.

Banks should be blamed for their losses, sources close to the audit said, as they inadequately verified Guangdong Zhenrong’s trade deals and were lax in risk control.

“Auditors have reviewed tons of loan records of banks and found no bill of lading was the original document,” one source said. According to industry rules, traders must use original bill of lading documents for trade finance, but all of the documents provided by Guangdong Zhenrong were copies.

“Banks had too much money due to the 4 trillion yuan stimulus package after 2008 and were eager to lend it out. Some banks begged to lend” to Guangdong Zhenrong, said a bank executive in Guangdong province.

But where did the money go?

The massive borrowing of Guangdong Zhenrong has been partly used to repay previous debts to support business expansion. But the whereabouts of the major part of the money has remained unclear.

Sources close to the company said about two-thirds of Guangdong Zhenrong’s capital has flowed into downstream companies controlled by a mysterious businessman supposedly named Xie Yun. The amount of money that went to Xie may have totaled more than 10 billion yuan, one source said.

Xie is the owner of one of the new shareholders that entered Guangdong Zhenrong after a 2009 share placement, business documents showed.

In 2009 when Guangdong Zhenrong registered more than 10 billion yuan of revenue for the first time, Xiong set an ambitious goal for the company to become one of the world’s top 500 companies within five years, meaning a nine-fold growth in annual revenue. The same year, Guangdong Zhenrong started share placements to increase its capital.

According to Guangdong Zhenrong’s financial reports, as of April 2017 the company had accounts receivable totaling 18.9 billion yuan from trading partners, including 10.3 billion yuan owed by 27 companies including Shanghai Rongkun Trade Co. Ltd.

Several creditors said Shanghai Rongkun and the 26 other companies are all backed by Xie and act in concert with Guangdong Zhenrong to arrange trade flows to beef up the company’s revenue totals.

But “Xie has never admitted that he owes 10 billion yuan to Guangdong Zhenrong and said he had repaid most of it,” said an official at Zhuhai Zhenrong.

“Guangdong Zhenrong lent money to Xie in hopes to generate profits, but now the question is where the money went,” the official said.

The real business of the dozens of companies controlled by Xie also remains unclear. Caixin learned that Guangdong Zhenrong has also questioned Xie’s investment and launched an investigation to trace the money. Xie said he invested the funds in equities and other assets but didn’t provide any concrete documents, sources said.

The real identity of Xie has also remained obscure. Caixin learned that he has also used the name Xie Dichi and asserted that he was a vice president of an asset management company called Guokai Hanfu. But that company told Caixin that it has no employee named Xie Dichi, nor one named Xie Yun.

As Guangdong Zhenrong’s crisis deepens, Xie has disappeared. A person familiar with Xie said he has been unable to reach Xie although he knows eight of Xie’s cellphone numbers. Another source said Xie is in Hong Kong but no creditor can find him.

Guangdong Zhenrong’s extensive network also includes CEFC China Energy, a private conglomerate that has been rattled by debt crisis this year after founder Ye Jianming was investigated by authorities for alleged economic crimes.

Caixin found that CEFC China also relied heavily on trading among affiliated companies and trade finance to support its expansion.

In 2010, Zhuahai Zhenrong, Guangdong Zhenrong and CEFC China set up a joint venture in Shanghai. A former CEFC China executive said the Shanghai unit was a major vehicle for CEFC China to obtain credit.