By Yu Zhongyin and Yu Yunhui 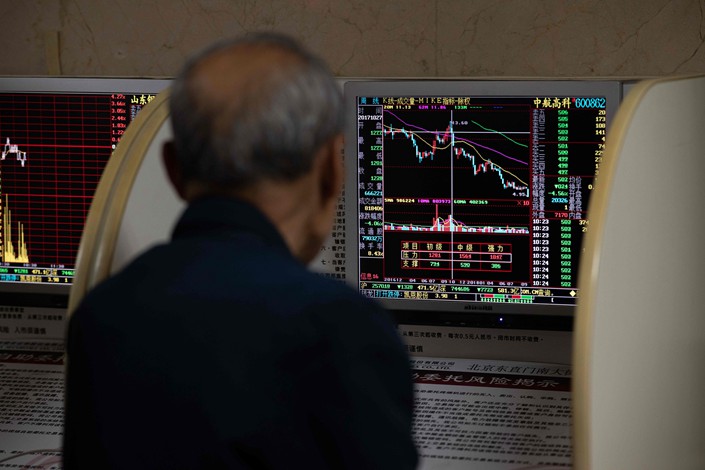 Although securities regulators have recently relaxed some regulations, the changes are not a cure to current liquidity crisis in the stock market. Photo: VCG

In the past six months, the Chinese economy has experienced a significant liquidity crisis. But this one is different from previous crises. The biggest casualties have been listed companies, notably large privately owned firms with strong positions in their industries, and their major shareholders. A serious lack of cash has forced many of these companies and their shareholders to transfer control over their shares to cash-rich state-owned entities.

Although clearly other factors are involved, we believe a key reason for this crisis that can’t be ignored is the continued failure of regulatory policies that are strangling companies and distorting the market.

Those who caused the problem now have to resolve it. To restore the market to normality as soon as possible, regulatory policies must be adjusted. Although there has been some loosening of policies regarding mergers and acquisitions, and restructuring, including backdoor listings, they do not offer a permanent solution.

Origins of the crisis

One purpose of an initial public offering is to create a liquid market for major shareholders to sell their stocks, which often comprise their best quality assets. However, two regulations on share sales introduced in January 2016 and May 2017 have completely changed the financial expectations of major shareholders by making it more difficult for them to sell their stakes in the secondary market.

At the same time, the deepening of supply-side reform made lending to some industries, especially those facing overcapacity, more risky. As a result, many financial institutions, including securities companies, started to offer shares in listed companies as collateral for loans that also carried favorable interest rates. Some even gave generous commissions to employees who brought in pledged-share business.

With shareholders increasingly restricted from offloading their holdings and with selling new shares to raise money becoming more and more difficult due to policy changes, many jumped at the option of pledged-share loans to meet their companies’ financing needs.

But in 2017, after many large shareholders had pledged shares for loans, the stock market started to go through a correction. Apart from a few large blue-chip companies, most shares of small and midsize companies fell more than 50% in 2017. As stock prices fell, many large shareholders were forced to hand over more and more shares to back their loans, putting a lot of pressure on the market.

At this critical time, another set of rules came out that pushed many of these shareholders into a liquidity trap. The “stock pledged buy-back trading, registration and settlement measures” issued on Jan. 12, 2018, mandated that the number of shares in any single company that could be pledged could not exceed 50% of the outstanding shares. That made it difficult for many major shareholders to pledge all their shares, and forced them to compete with other smaller shareholders for the limited quota.

As the liquidity crisis deepened, the regulatory authorities began to provide window guidance to securities firms to stop them selling pledged stocks. As a result, many brokerages, facing losses from being unable to recoup loans by offloading shares, became more cautious about offering pledged-share loans and imposed tougher conditions on borrowers.

A-share listed companies have traditionally been the preferred customers of commercial banks because of their ability to tap financial markets directly for money, and they have rarely been troubled by liquidity problems. However this year, a large number of listed companies, including Kaidi Ecological and Environmental Technology Co. Ltd., Wintime Energy Co. Ltd. and Anhui Shengyun Environment-Protection Group Co. Ltd., have been unable to repay their debts.

In May 2006, the CSRC released rules that subjected investors in private share placements by listed companies to lock-up periods of between one and three years. This funding channel at one point provided more than 90% of the money raised annually by listed companies through share sales. In February 2017, rules for private share placements were amended that put a 10% limit on the discount companies could offer on the price of the new shares compared with their trading price in the secondary market. That May, new regulations extended the lock-up period for private placements, with one-year restrictions on selling in effect lengthened to two years and three-year restrictions extended to five years including the approval process (which can last at least half a year). The 10% discount limit could hardly compensate investors for the market risk of holding shares for as long as five years. As a result, the new rules made it much more difficult for companies to issue private placements, and five-year private placements have basically dried up.

The amended private placement rules not only raise risks for investors, they also fail to conform to international practice. Although the price discount for stock placements in mature capital markets is about 10%, they are generally conducted in a timely manner, with no prior approval time and no mandatory lock-up commitment.

Since the current liquidity crisis facing listed companies and their major shareholders is the consequence of the unrelenting layering of new regulations upon existing ones, the authorities should start by revising unreasonable policies.

First, the 50% limit on the number of shares that can be pledged in one company should be lifted. This will not only immediately improve the financing environment for major shareholders, but also send a signal to the market that share prices have bottomed out.

Second, regulators should return to the previous rules that allowed companies to use a more flexible mechanism to price shares in private placements with a three-year lock-up period (which would offer a bigger discount to reflect the risk). They should also remove the limit on the size of any single placement issue (currently private placements are limited to 20% of the number of shares in issue). Initially, the main purpose of the revisions was to prevent investors and listed companies from colluding to make illicit profits. But recent statistical analyses of private share placements whose lock-up periods ended in the last six months have shown that more than half of investors lost money, which demonstrates that private placements aren’t always profitable.

Under the current lock-up rules, investors have to make their decision to invest based on an analysis of the fundamentals of a listed company and have sufficient confidence in its medium- and long-term development prospects. Restoring the more flexible pricing mechanism will not only immediately ease the liquidity crisis of listed companies, but also send a strong positive price signal to small investors in the market.

Third, regulators should consider setting up a national equity investment fund that can cooperate with market-based funds to offer direct equity financing for privately held listed companies that have achieved a certain position in their industry and conform to national industrial policies.

However, it’s important to stress that after the three-year lock-up period, the relevant state-backed funds should entrust professional institutions to gradually withdraw their relevant investments based on the state of the economy. This is easier to operate than the recommendations currently under discussion for providing policy financing guarantees to private companies, and the subsequent moral hazard is smaller.

Yu Zhongyin is an experienced professional in the financial industry, but has requested to use a pseudonym due to the sensitive nature of public discussion of financial regulation. Yu Yunhui is an independent director at Anxin Trust.