By Yang Rui and Wu Gang 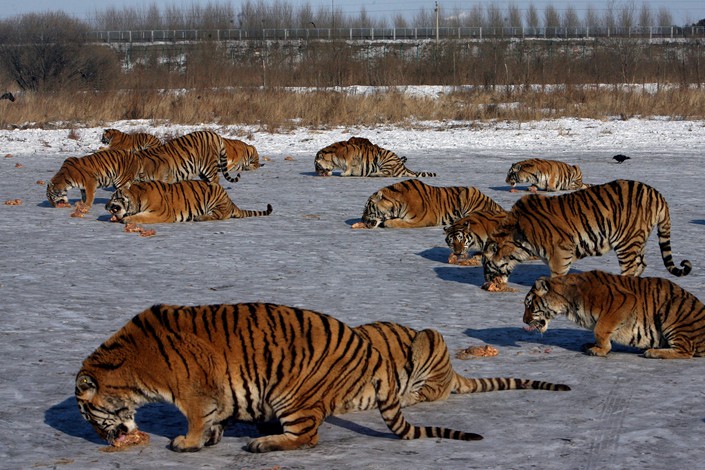 A government notice that legalizes the use of tiger and rhino parts in certain circumstances, including scientific and medical research, has aroused international debate over whether China has lifted years of a well-acclaimed ban to protect the endangered animals.

The statement also said the rhino horns and tiger bones that are used for legal purposes must be obtained only from animals on farms, not those raised in zoos or caught in the wild.

In 1993, when China’s wild-tiger population dwindled to less than 100, the government banned all trading of rhino horns and tiger bones. It also outlawed the use of them as medicines in the same year.

The World Wild Fund for Nature (WWF) responded immediately on Monday, saying the loosening of the regulation, even though limiting tiger bones and rhino horns to medical use and only from farm animals, will still stimulate demand and threaten the survival of wild tigers and rhinos.

“With wild tiger and rhino populations at such low levels and facing numerous threats, legalized trade in their parts is simply too great a gamble for China to take,” said Margaret Kinnaird, WWF global wildlife practice leader. “This decision seems to contradict the leadership China has shown recently in tackling the illegal wildlife trade, including the closure of their domestic ivory market, a game-changer for elephants warmly welcomed by the global community.”

The WWF told Caixin on Tuesday that any degree of trade resumption can whitewash illegal trafficking, as it will be very difficult to distinguish farm-raised animals from wild ones.

However, Ji Wei, an independent wild life researcher, told Caixin that he believes China’s regulation change will not necessarily lead to an increased threat to wild populations of rhino and tigers.

Judging from China’s experience in protecting wild tigers, the biggest threats are still their shrinking habitats, shortage of prey and conflicts with humans, Ji said.

“Making use of farm-raised tigers in accordance with regulations, including healing people, does not necessarily threaten the survival of wild tigers,” Ji said. “Actually, the fund recovered can even be used to protect the wild tigers’ habitats.”

He said authorities should focus on cracking down on illegal products of the protected animals.

Although China has been working hard to protect wild tigers since the 1980s, it is still believed to have only about 20 tigers living in the wild. The number of domestic tigers have grown to about 5,000 nationwide, which are mainly in farms, zoos and circuses.

A report published by Southern Weekly in 2015 said a farm in Northeast China’s Heilongjiang province was found to be storing the bodies of more than 200 tigers in a huge refrigerator. The farm was said to have considered the bodies worth a fortune and had been waiting for the lift of the tiger products ban.

The Chinese Foreign Ministry on Tuesday argued that the 1993 regulation was loosened because it “failed to accommodate the practical and reasonable needs of scientific research, education, law enforcement and appraisal, medical healing and cultural relics protection and exchanges.”

Foreign Ministry spokesman Lu Kang added that the new rule actually strengthened the regulation, as the 1993 regulation addressed only the sales and use of rhino horns and tiger bones, but lacked specified regulations on other rhino and tiger products, “thus leaving loopholes for cracking down on bad behaviors like eating tiger meat and manufacturing and selling tiger skin-made clothes.”