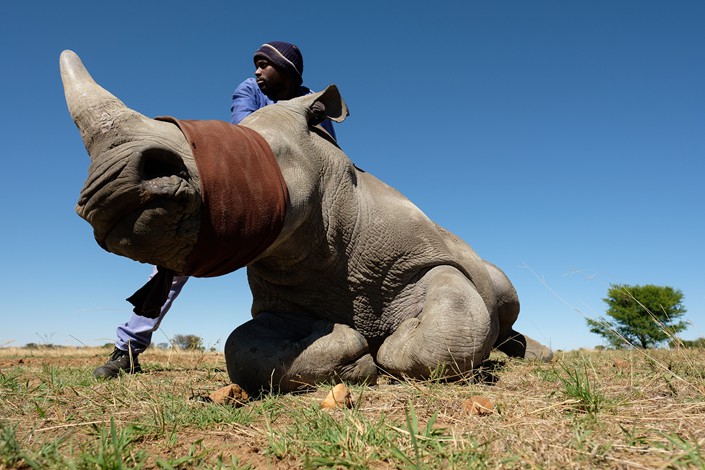 The rhino-horn trade has been illegal in the country for 25 years. But it hasn’t stopped some traders from offering it in private chat groups, where they also supply other illegal items like ivory and tiger hides, under euphemistic names designed to evade WeChat’s keyword blockers, Caixin found.

Rhino horn, which is wrongly believed by many in Asia to have medicinal qualities, travels from the animals’ natural habitats to the hands of wealthy buyers through a long supply chain that stretches around the globe.

Rhinos were once widespread across China during the Shang Dynasty, more than 3,000 years ago, but they became extinct in the country by the early 20th century. Three of five rhino species are now critically endangered, with just 67 individuals from one species, the Javan rhino, remaining in the world, according to the London-based charity Save the Rhino International.

China is the world’s largest market for rhino horn, according to estimates by the Los Angeles-based conservation nongovernmental organization (NGO) Elephant Action League. A major problem is poor law enforcement along China’s long land border with major smuggling hub Vietnam, alongside a lack of coordination between countries involved in the illegal wildlife supply chain, NGOs and volunteers told Caixin.

Back from the dead

China banned the import, export and transport of rhino horn in 1993, in line with an international ban on the trade that came into effect on 1977.

But then signs of a rebound in the trade began appearing as the rise of e-commerce gave illegal sellers new ways to reach buyers. An England-based conservation NGO, Traffic, found in 2006 that 193 items made from rhino horn were being sold on websites based in Taiwan, Hong Kong and the Chinese mainland.

In June 2012, Chinese authorities held a meeting with 15 online retailers, including major players Alibaba Group Holding Ltd. and Tencent Holdings Ltd., where the retailers signed statements of zero tolerance for the illegal wildlife trade. Xu Ling, a project director at Traffic, told Caixin that this slowed the growth of online rhino-horn trading for a few years, but another rebound occurred again after 2015.

Social media has now become the main channel for illicit rhino-horn deals, Caixin has learned. While online platforms have blocked searches and posts containing rhino-horn-related keywords, potential buyers can still find sellers through WeChat friends’ recommendations, and sellers, like one who offered Caixin “unicorn disks,” have found ways to circumvent the tech measures in place.

Another factor allowing China’s illegal rhino-horn market to survive is its proximity to Vietnam, a major rhino-horn hub. The Southeast Asian country announced a ban on the rhino-horn trade only this year, and ranks third in the world, after South Africa and China, for cases of authorities seizing rhino-horn products, according to data published by Traffic.

Yang Ming (not his real name), a volunteer who investigates wildlife trafficking in Southeast Asia, told Caixin that weak rule of law in some Southeast Asian countries has made the region fertile ground for the rhino-horn trade.

It also doesn’t help that that China’s long land borders with these countries make it difficult to police the movement of wildlife products, Yang said.

Most of the rhino horn smuggled into China arrives over land, according to Elephant Action League’s 2017 report, which found that mountain roads were popular routes. Rhino horn is known to be available at traditional Chinese medicine markets in the southern provinces of Guangdong and Yunnan, and the Guangxi Zhuang autonomous region, Yang told Caixin.

Another volunteer, who declined to be named, described the limited effectiveness of China’s forest police in controlling the rhino-horn trade. Local forest police have on multiple occasions asked the volunteer to personally investigate rhino-horn and pangolin transactions at physical marketplaces, he told Caixin, partly due to cost and manpower concerns, but also because the police feared being accused of entrapment.

Continued demand for rhino-horn products has kept prices of the substance, which is physically similar to human nails, high enough to lure poachers and smugglers into the trade.

Awareness that rhino horn does not have medicinal effects, despite its traditional use in herbal concoctions, remains relatively low, with 44.5% of Chinese respondents to a 2014 WildAid survey saying they believed rhino horn had medical benefits.

Another survey published in June showed that while purchasers of illegal wildlife products make up a minority of the Chinese population, they tend to have significantly inflated perceptions of how socially acceptable their purchases are.

Demand from other countries in the region is also a growing problem. Over the past 10 years, reports that rhino horn can prevent and treat cancer have increased in popularity in Southeast Asia, further fueling demand, Beijing Normal University’s Zhang told Caixin.