China’s National Parks to Spruce Up 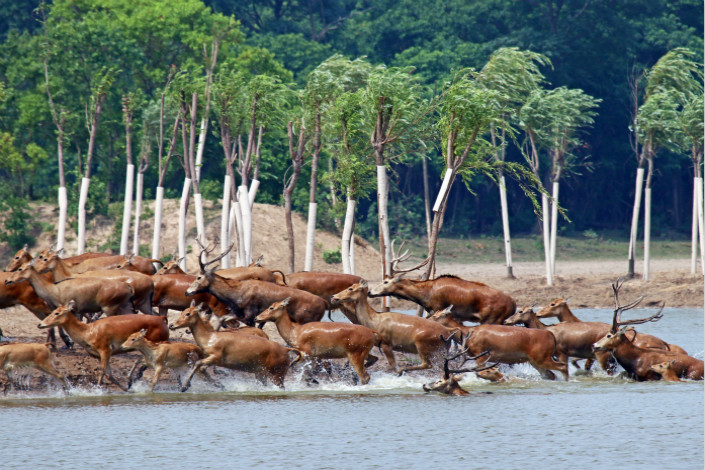 The chaotic management of the Sanjiangyuan conservation zone led to local farmers being paid to erect fences, and then paid to make their fences shorter by two different government departments. Pictured are a group of Pere David's deer in the Dafeng Moose National Nature Reserve in the eastern province of Jiangsu. Photo: Visual China

Long scarred by open-pit mining and encroached upon by hotel development projects, China’s conservation zones have been struggling for decades.

Part of the problem lies in the complex administration of eco-zones. Authorities in charge of agriculture, forestry, land use and environmental protection — all with competing interests and varying conservation standards — have at times undermined each other’s efforts while trying to preserve national parks.

But a new development blueprint modeled after the management of Yellowstone National Park in the U.S. aims to cut red tape by centralizing park administration.

The policy paper titled “Overall Plan for Building a National Park System,” also proposes to create 10 national parks from the heights of the Qinghai-Tibetan plateau to the foot of the Great Wall outside Beijing, by 2020.

China’s top economic planner, the National Development and Reform Commission will spearhead this three-year pilot program and gradually take on the oversight of all national-level reserves.

“The national parks program will reduce fragmentation of habitats for protected species and protect fragile ecosystems in their entirety, by centralizing oversight,” according to the document jointly issued by the State Council, China’s cabinet, and the Communist Party’s Central Committee in late September. It also proposes to relocate tens of thousands of households living inside these parks, without offering details on compensation.

The document comes hot on the heels of a recent study, which found that wild pandas native to a few areas in southwest China were struggling to find mates after their groups were cut off from others by roads crisscrossing their habitats.

There are over 1,800 pandas in the wild, according to a 2014 survey. But they roamed in 30 isolated groups with 18 groups having fewer than 10 animals, which “raised their risk of local extinction,” said the study published on Nature Ecology & Evolution on September 25.

China has designated 8,000 sites as natural reserves, national forests, wetlands, geological parks and scenic spots — accounting for 18% of the country’s total area — for conservation since 1949.

The ministry divided the country's nature reserves into three types in 1994, namely strictly-protected core areas open only to scientists, buffer zones and experimental zones where some commercial activity, controlled logging or livestock grazing are allowed.

But lax oversight and competing interests of different authorities have made these reserves vulnerable to encroachment and excessive development.

These include failure to curb open-pit mining inside conservation zones in the Ningxia autonomous region and allowing pig farmers to discharge untreated wastewater into rivers in Guangdong province. Administrators at Henan’s Xiaoqinling National Nature Reserve were censured for allowing mining companies to dump more than 20 million tons of waste in protected areas, while a cement factory was found operating in a reserve in the Inner Mongolia autonomous region.

But at other times, authorities have been tripping over each other in their efforts to protect reserves, resulting in wasteful spending. An example of this is the “bizarre fencing policy” at Sanjiangyuan, a nature reserve protecting the catchment area for three of Asia’s great rivers — the Yellow River, the Yangtze, and the Mekong.

Sanjiangyuan, a conservation zone in Northwest China’s Qinghai province, was managed by the local agricultural bureau and forestry administration before it was made into a national park last year, said Dr. Peng Kui, a project officer at Beijing-based conservation advocacy group the Global Environmental Institute.

The agricultural department at first paid local farmers to tend to the grassland and to build and maintain fences separating their plots, said Peng. But the forestry authority, tasked with protecting endangered species, offered financial incentives to the same local residents to remove these fences or lower their height to protect the Przewalski’s gazelle.

The animal, which is endemic to China, is also listed as an “endangered species” by the International Union for Conservation of Nature.

“It lead to a bizarre situation in which farmers were given cash from one authority to put up fences, while they later received money from another to lower these barriers or remove them,” said Peng.

The lack of coordination between the two administrative bodies meant that the local agricultural authority didn’t set limits on the height of the fences.

If a fence and the barbed wire on top was taller than 1.2 meters, 94% of adult gazelles in the area would be unable to jump over the barrier for grazing or to find mates, a study by Liu Jiazi, a doctoral student at Peking University, found.

On top of cutting red tape, the centralized park administration will also face enormous challenges when raising billions of yuan needed for infrastructure upgrades and to acquire land collectively owned by local farmers that wasn’t included in the conservation zones earlier.

In East China, up to 80% of forest land in nature reserves and parks is collectively owned by local farmers meaning the government needs to first pay to acquire this land and compensate loggers for loss of income, said Ouyang Zhiyun, a researcher on a national experts’ panel to evaluate the national parks program.

Ambitious park administrators want to include seven smaller nature reserves, three forest parks and a wetland park nearly the size of Beijing, with a total area of 14,600 square kilometers, in this massive conservation zone.

Meanwhile, Sanjiangyuan National Park in a notice earlier this year, said it will relocate 61,588 residents living in areas newly designated for the park. District- and town-level authorities have already committed 100 million yuan to match the 40 million yuan from the Qinghai provincial government for infrastructure construction, park management said.

In addition to government funding, tourism has served as important source of revenue for parks. But the new blueprint failed to offer any guidelines on how to balance conservation goals and demands by a growing number of visitors.

This loophole could allow cash-strapped local governments to continue to outsource the management of smaller nature reserves to tour operators. For example, Pudacuo National Park — the most prominent of the eight national parks in Yunnan province — is managed by a travel company in Diqing prefecture. The park hasn’t received any public funding since it was set up over a decade ago, although Yunnan was among the first provinces in China to introduce a national park system 15 years ago.

The company uses part of the money made from entrance fees for conservation work, said Wang Yue, a former project manager with The Nature Conservancy. The Washington-based conservation group has advised the Yunnan provincial government over its national park development program over the past decade.

“We were thinking of a compromise solution. We advised to operate the park not as a nature reserve or a tourist destination, but something in between to make it sustainable,” she said.

However, the park has been monopolized by the travel company and they charged high admission fees similar to a commercial park, said a researcher who asked not to be named.