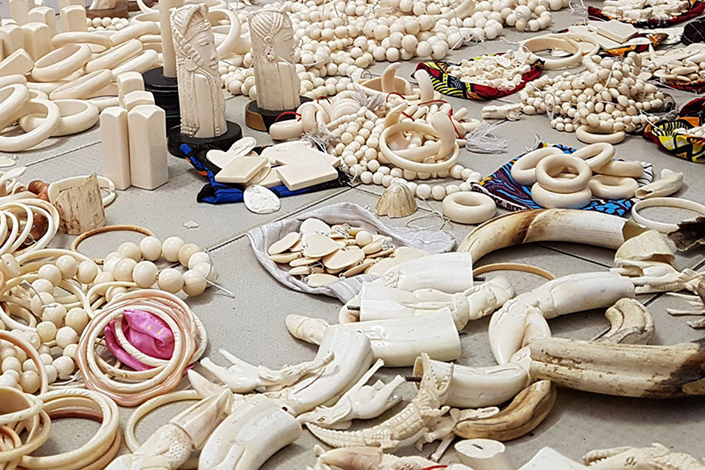 Fewer than 20% of the 1,800 Chinese citizens surveyed in six first- and second-tier cities said owning or buying elephant, rhino, pangolin and tiger parts is “socially acceptable,” but the majority of those who had made such purchases said it was acceptable. Photo: VCG

Most Chinese people think purchasing parts of endangered wild animals is frowned upon by their respective communities, but those who do buy the products have the opposite view, according to a study of consumer demand for elephant, pangolin, rhino and tiger parts published this week.

Fewer than 20% of the 1,800 Chinese citizens surveyed earlier this year in six first- and second-tier cities, including Beijing and Shanghai, think owning or buying elephant, rhino, pangolin and tiger parts is “socially acceptable,” according to the study, which was jointly conducted by the U.S. Agency for International Development Wildlife Asia (USAID Wildlife Asia), Beijing Normal University and GlobeScan, a Canada-based public-opinion research firm.

However, the small part of the population — less than 16% — who had purchased products made from the four species mostly thought that doing so was socially acceptable. In addition, 85% of people who had bought elephant products, including ivory, in the past year agreed that the practice was socially acceptable, while the figures for buyers of rhino, pangolin and tiger products were 76%, 67% and 69% respectively.

All four species covered by the study are considered endangered or vulnerable under the Convention on International Trade in Endangered Species of Wild Fauna and Flora, and trade in their body parts is generally illegal in China, although multiple loopholes exist. China, the world’s largest consumer of ivory, introduced a near-total ban on the ivory trade on Jan. 1.

The study’s results suggest that wildlife-parts buyers in China, especially those making unplanned purchases, tend to have low awareness of the products’ wider social acceptability and legality. Half of the respondents who made an unplanned purchase of an elephant product in the past year said they made the decision entirely by themselves, compared to the 17% who said they had made the purchase based on others’ recommendations.

The people making recommendations tended to be friends, salespeople or colleagues for most buyers, although doctors and “experts” also played a major role in influencing purchases of pangolin and tiger parts. Most people who had previously purchased wildlife parts said they planned to do so again in the future.

Less than half of the general population surveyed, including nonbuyers, was aware of the new ban on the ivory trade, while only 19% were aware of messages in the media, including campaigns by celebrities, against the consumption of wild animal parts.

Consumer behavior varied by species. While half of elephant and rhino parts purchases were made while respondents were traveling outside the Chinese mainland, a large proportion of pangolin and tiger parts were purchased in traditional Chinese-medicine pharmacies on the mainland, as well as in retail stores. Wildlife products were purchased largely due to perceptions that they are rare, spiritually significant, beautiful, lucky, or good for one’s health, the study found.

According to the USAID Wildlife Asia report’s authors, the “involvement of many other sectors in China” is needed in order to fight the illegal wildlife trade. “To overcome this challenge, we have to move strategically, and coordinate our effort with NGOs, the private sector, and all stakeholders who are involved in consumer demand reduction,” said Aster Li Zhang, a researcher at Beijing Normal University and the study’s principal investigator, in a statement.