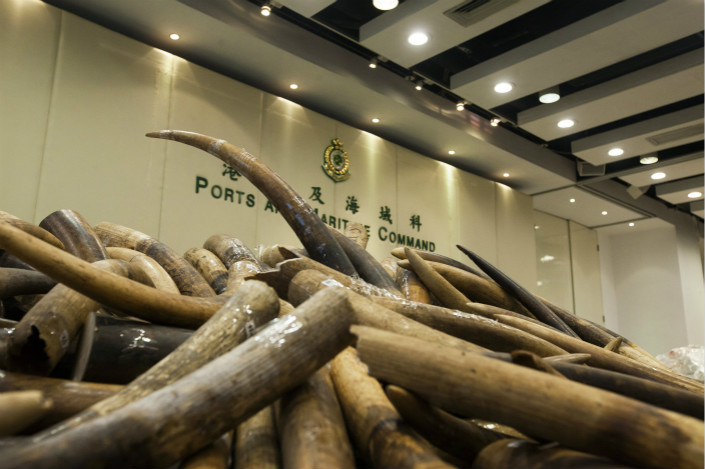 Seized ivory is displayed at a Hong Kong Customs and Excise press briefing in July 2017. The city has long been a gateway for both illegal and legal ivory imports into China, the world’s largest consumer of the material. Photo: IC

Hong Kong’s legislature has voted to completely end the city’s ivory trade by 2021, weeks after the Chinese mainland’s ban took effect in January.

The special administrative region’s Legislative Council agreed Wednesday on a three-stage plan to shut down the local ivory trade and toughen regulations on the import and export of ivory.

A ban on the import and re-export of elephant trophies — animal parts collected by recreational hunters — will be in place immediately after the law comes into effect.

Then, three months later, imports and re-exports of all ivory dating to before 1976, when the Convention on International Trade in Endangered Species listed elephants as endangered, will also become illegal — a category of ivory that has frequently been exploited by dealers who disguise illegally obtained ivory as legitimate products.

The import and re-export of ivory procured after 1976 is already illegal in Hong Kong.

Finally, a prohibition on commercial possession of all ivory other than antiques — which are defined as ivory “significantly altered from its natural state for jewelry, adornment, art, utility or musical instruments” produced before 1925 — will become effective on Dec. 31, 2021.

Hong Kong’s government will not provide compensation to merchants affected by the ban, saying the possibility of such payments could spark a rush to illegally import ivory in the next few years “to launder with the legal stock for seeking compensation.”

The city has long been a gateway for both illegal and legal ivory imports into China, the world’s largest consumer of the material. Before China shut down its legal ivory trade, mainland traders were able to disguise the source of their ivory stock through middlemen located in Hong Kong, which has a separate legal system from the rest of the country.

China implemented a near-total ivory ban on Jan. 1, but conservation groups have expressed concern that this could merely cause the trade to relocate itself to the special administrative region.

An April report by wildlife trade monitoring NGO Traffic found that a third of ivory traders in Hong Kong encouraged their customers to smuggle ivory out of the city onto the Chinese mainland without export permits.

“Today is a great day for elephants,” Hong Kong-based campaigner Alex Hofford said in a statement by WildAid Wednesday, adding that Hong Kong had “always been the ‘heart of darkness’ of the ivory trade.”

Once Hong Kong’s ban becomes effective, Thailand and Japan will become the largest legal ivory markets in the region. Thailand has in recent months made attempts to curb the trade, including measures to set up a DNA database of elephants in the country.

Meanwhile, Japan has come under international pressure to end its legal ivory trade, which is seen as undermining efforts in other countries. Around 95% of the 2.42 tons of ivory illegally exported from Japan from 2011 to 2016 was headed for China, according to a Dec. 20 report by Traffic.