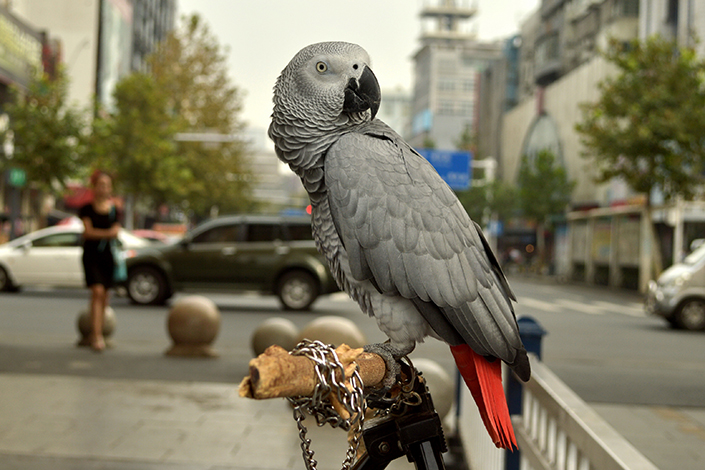 A Shenzhen man was sentenced to five years in prison for selling several parrots that are endangered species, stirring online debate over whether the punishment was fair. Above, an African gray parrot stands in front of a shop in Changde, Hunan province, on Oct.4, 2014. Photo: Visual China

(Beijing) — A Shenzhen factory worker serving a five-year prison sentence for selling a type of parrot protected by an international endangered-species law is appealing his punishment as too tough — and he’s getting plenty of public support.

“Isn’t it too harsh to jail someone for five years over birds bred at home?” asked one internet commentator under the ID of hcsp2000.

“Don’t judges have better things to do, or are they simply telling us that animals are more important than us?” asked another commentator.

The pair produced more than 50 baby parrots in a year and her husband sold six of the offspring to another friend for 3,000 yuan ($435), Ren said.

In May 2016, Wang, 32, was arrested and charged with the illicit sale of rare and endangered species. In late March, he was sentenced to five years in prison by Shenzhen’s Baoan District People's Court.

The court said that Wang’s parrots, though home-bred, were protected under the Convention on International Trade in Endangered Species of Wild Fauna and Flora (known as CITES), a multilateral treaty that protects endangered animals and plants.

The case illustrates the tightrope that authorities in China often find themselves walking as they try to balance protecting animals and the ecosystem while at the same time fighting animal poaching and severe environmental degradation.

In a statement released on Monday, Wang’s two attorneys, Xu Xin and Si Weijiang, said that the public backlash raises questions about whether the court handled the case in accordance with the law and also whether its judges are in touch with community sentiment.

Others disagree, saying the court verdict is justified. Wang couldn’t have bred parrots without knowing the species and habitus of the female parrot he bought, an employee of TRAFFIC, a non-governmental organization specializing in wildlife trade, told Caixin.

That means Wang knew he was dealing with an endangered species, said the activist, who asked not to be named.

The activist also raised doubts that two parrots could have produced 50 babies in a year, especially resulting in three different parrot species. Wang could have bought some of the baby parrots elsewhere illicitly to make money, the activist said.

The verdict followed a similar case involving another man who was sentenced to 10 1/2 years for selling falcons, a punishment that many Chinese also felt was too severe.

In the falcon case, the Huixian court in Henan province sentenced a college student who pleaded guilty to selling 16 baby falcons he snatched from a nest in 2014. He made 1,080 yuan from the sales, court paper shows.

Falcons are designated by the national government in China as a Class II protected species.

TRAFFIC investigators found that the college student, Yan Xiaotian, was actually a member of a local falcon watch group, according to the TRAFFIC employee.

His sentence was justified because Yan didn’t mistake the falcons as ordinary birds, and he chose to break the law, the activist said.