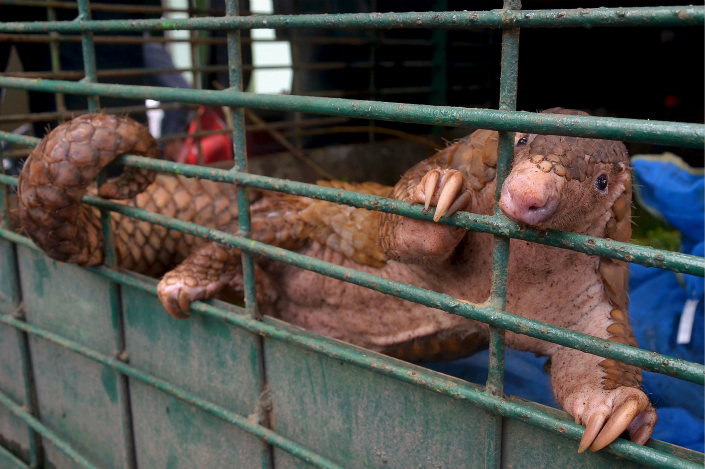 A pangolin, considered the most-trafficked mammal in the world, clings to a cage on Oct. 25 after a raid in Indonesia. Photo: VCG

Conservationists are pushing for higher protection status in China for the endangered pangolin, in an attempt to stop the illegal trade of the species before it becomes extinct.

Some 180 nongovernmental organizations (NGOs) and individuals have signed a joint appeal for Chinese lawmakers to upgrade the legal protection of the mammal, according to Shao Wenjie of the China Biodiversity Conservation and Green Development Foundation.

Advocates have voiced concern over the wide use of pangolin scales in Chinese medicine — for which there is no scientifically supported evidence of benefit — and the popularity of pangolin dishes at some restaurants.

The use of animal parts in traditional Chinese medicines has driven other endangered species, such as some tigers, close to extinction in China and worldwide.

Over the last few years, several Chinese citizens have lost their jobs or found themselves under investigation after posting photos on social media of them eating pangolin, which some wildlife experts say is the most-trafficked mammal in the world.

China is home to two of earth’s eight pangolin species — the Chinese and Malaysian varieties — which were commonly found in the south of the country until the 1980s, when their numbers began quickly dwindling due to poaching and loss of habitat.

“Spotting pangolins in the wild is almost impossible now, a far cry from how it was back then,” Shao said.

In China, the pangolin is listed as a grade-two National Key Protected Species, the lower status in a two-level protection system. That means the use and trade of the pangolin is still legal with official approval. China allows 25 tons of pangolin scales to be used in medications per year, according to a document from the State Forestry and Grassland Administration.

However, poaching is rampant, and more than 1 million pangolins were illegally trafficked globally between 2006 and 2015. One-tenth of those were smuggled into China, according to the International Fund for Animal Welfare.

Live pangolins smuggled into China can be sold for 10,000 yuan ($1,570) apiece on the black market, according to a conservationist who has surveyed the illicit trade of the species.

China should bring itself in line with protection status for the pangolin adopted by the International Union for Conservation of Nature, which in 2013 raised the status for the Chinese and Malaysian species from endangered to critically endangered, just one notch from extinction in the wild, according to Sun Quanhui, a science advisor to World Animal Protection, an international NGO.

Trade of the pangolin is also prohibited under the Convention on International Trade in Endangered Species of Wild Fauna and Flora, a leading international treaty of which China is a signatory.