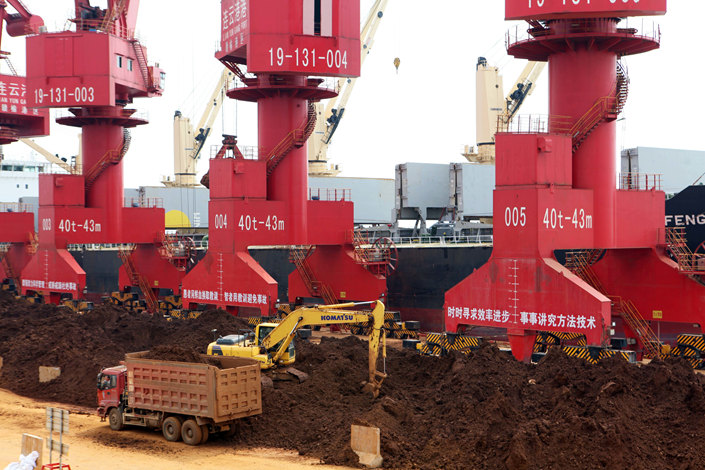 Zhejiang Huayou Cobalt Co. Ltd. said it will provide most of the money needed to set up a $1.83 billion Indonesian nickel smelting project, as mining companies scramble to secure the raw materials that will supply the expected new-energy vehicle boom.

The company announced it is setting up a joint venture with four partners — two based in Hong Kong, one based in the British Virgin Islands and one in Indonesia — to set up a nickel ore smelting project capable of producing 60,000 metric tons (66,000 U.S. tons) of nickel, the company said in a filing (link in Chinese) on Tuesday. Huayou will hold a 58% majority stake, but will provide $1.28 billion, or 70%, of the total financing to set up the project in Indonesia’s Central Sulawesi province.

Huayou is already a major player in producing raw materials for batteries, but has courted controversy over labor conditions in its cobalt mines in the Democratic Republic of Congo, which were estimated to supply around 20% of the material used in Apple Inc. products’ batteries as of 2016, according to a Washington Post report.

Huayou is one of many mining companies betting big on explosive growth in new-energy vehicles — cars that use pure-electricity, hybrid or hydrogen technologies. Analysts predict cobalt and lithium could be to the 21st-century vehicles market what oil was to their 20th-century forerunners. China is already the world’s biggest new-energy vehicle market, which vehicle and battery producers alike having received high levels of support to give them an advantage in the nascent market.

In tandem with this, Chinese miners and smelters have been major players in related major overseas mining investments, particularly in Chile and Congo. The rush led the CEO of Glencore PLC, the world’s biggest cobalt producer, to warn in March that China is looking to dominate the industry, according to Reuters.

While much attention is given to cobalt and lithium, nickel also plays a major role in electric vehicles’ batteries, and is a key component in the cathode through which current flows in a lithium battery. Only 49% of the global nickel supply in 2017 was suitable for use in batteries, S&P Global pointed out, leading many companies to explore exploiting richer deposits for supplies.

Yet according to Huayou’s filing, the company plans to use the new smelting plant to explore developing new types of electric batteries that make greater use of nickel. As a recent Wood Mackenzie report notes, while cobalt and lithium dominate electric battery-making at present, “the current generation of lithium-ion batteries are starting to approach their limits. One thing is sure — the battery raw materials sector will continue to evolve.” Huayou’s experimentation with nickel appears to be based on the idea that nickel could play a greater role in battery-making in the future.

Huayou’s move “is a part of wider industry trend,” said Daniel Chen, a metals trading expert with CRU Group. “Nickel intensive NCM products (or nickel cobalt manganese, used in lithium batteries), are getting popular, and many players want to increase their investment in nickel sulfate,” he said. “While nickel is currently mainly used for stainless steel, many are forecasting another huge boom in electric vehicles, which needs lots of nickel sulfate,” he added.

Huayou is not the only Chinese company racing to invest in Indonesia’s mining sector. In September, stainless-steel maker Tsingshan Holding Group Co. Ltd. announced it will lead a group of investors in building a roughly $920 million electric-battery plant, with the highly ambitious target of getting it up and producing by the end of next year despite its having no experience in the industry. While the odds are stacked against it, if it is successful “other Chinese companies will probably attempt to mirror that success with their own investments,” Wood Mackenzie said in a recent note.