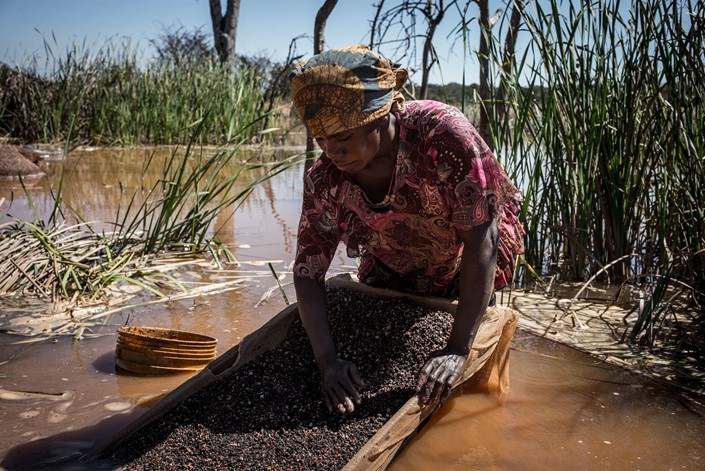 A woman pans for cobalt in May 2015 near a mine in the Congo. Photo: VCG

Zhang Fan, an investment manager for a private Chinese metals company, set foot in the Democratic Republic of the Congo for the first time in late 2016. But he and his team have been back three times since, tasked with one mission — procuring cobalt.

Over the past two years, dozens of private Chinese companies have ramped up investment in the central African country, where more than 60% of the world’s raw cobalt ore is produced.

China’s domestic policy support for new-energy vehicles is driving demand for the silver-gray metal, a key component in the lithium-ion batteries that power electronic devices and electric cars.

About 7,680 metric tons (8,470 U.S. tons), or 16%, of cobalt in China were used in electric vehicles last year, and consumption is expanding fast, according to Beijing Antaike Information Development, a consultancy. The price of cobalt shot up from an average of $24,000 per metric ton in 2016 to above $90,000 this year.

China Molybdenum Co. Ltd., which controls around 12% of the global cobalt supply, was an early entrant into Congo, and is now joined by several others seeking fortunes along the supply chain.

China Molybdenum got its sizable market share thanks to its purchase of a giant copper and cobalt mine in Congo in 2016. It bought the Tenke Fungurume mine for $2.65 billion from U.S.-based Freeport-McMoRan Inc., the world’s largest producer of molybdenum, a metal used to strengthen alloys.

The country’s other large cobalt mines are divided among Chinese state-owned enterprises such as China Nonferrous Metal Mining (Group) Co. Ltd., domestic Congolese firms, and foreign firms including those in Australia and the U.K.

“It’s become increasingly difficult for new entrants to purchase mines, as the small portion of economically promising mines are sought by so many bidders,” said an industry executive familiar with the situation.

However, some Chinese companies have managed to indirectly buy into mines by renting exploration permits from — or buying stakes in — other controllers. For example, Congo-based Gecamines recently agreed to lease access of one of its mines to Shanghai Pengxin Group Co. Ltd. for 25 years.

In December, Chinese refiner Zhejiang Huayou Cobalt Co. Ltd. said it had purchased a 51% stake in a company called Lucky Resources Holdings Ltd. for $66.3 million in exchange for the latter’s exploration permit of a Congolese mine.

But instead of a sole focus on mining, which is usually capital intensive and riskier, companies have taken more interest in the downstream cobalt chain.

In Congo, raw ore is not allowed to be exported out of the country. Companies that buy raw materials from miners or other traders initially process them into cobalt hydroxides in local facilities. They are then shipped to China to be further refined into cobalt sulphates and oxides.

Over the last year, Huayou has set up two more facilities worth $150 million to turn 6,000 metric tons of raw cobalt into hydroxides over the next two years. Also last year, Shenzhen-listed Nanjing Hanrui Cobalt Co. Ltd. issued new shares to raise as much as 326 million yuan to increase production.

The primary source of raw cobalt for these private Chinese companies is from freelance miners, known as “creuseurs,” the French word for “diggers.” This cobalt usually costs less than from big mining groups.

Huayou had reportedly purchased large amounts of cobalt from such creuseurs, and the company came under international scrutiny in 2016 when London-based human rights group Amnesty International published a report showing that many of these workers were children operating in unsafe conditions.

Huayou has since promised to diversify its supply sources. But the disclosure of the child labor could mean local governments tighten rules, resulting in an unstable labor market, reduced supply and higher prices, a source from a Chinese metal company told Caixin.

Additionally, doing business in a country rampant with corruption means that it is important to find politicians who “hold the keys,” the source said. “But such people are hard to find.”

Moreover, companies jumping on the cobalt bandwagon face risks from the battery technology itself. Some industry experts have warned that the metal may lose its importance as less-cobalt-dependent batteries are developed.

But investment manager Zhang Fan — who gave a pseudonym to protect his identity — is optimistic that it could take five or 10 years before such a technology shift happens. In the meantime, “the price of cobalt is unlikely to spike as it did the last two years, but may not experience a big fall either,” he said. “Companies just need to adjust accordingly.”