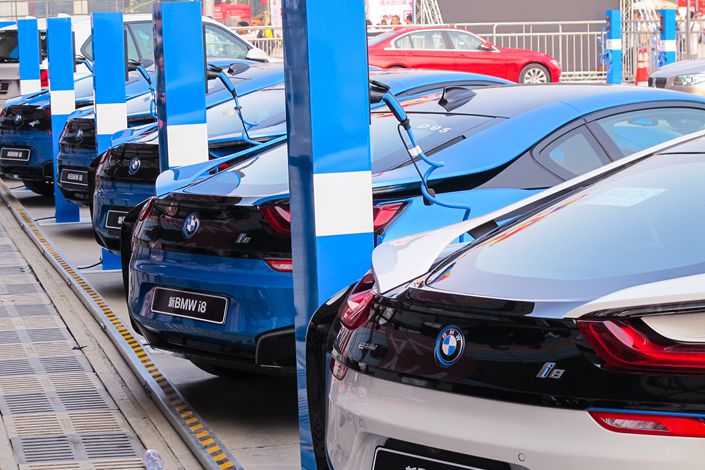 China has chosen 17 cities and regions to kick off a pilot program to recycle used electric-vehicle batteries, as the government moves to tackle the potential environmental hazard from the country’s status as the world’s largest market for new-energy vehicles (NEVs).

The program will include large cities such as Beijing, Shanghai and Xiamen, as well as Jiangsu, Anhui and Guangdong provinces, according to a statement (link in Chinese) posted Wednesday by the Ministry of Industry and Information Technology.

The ministry urged the local governments to work with automakers to set up recycling outlets, and with battery-makers, used-car dealers and scrap merchants to jointly build regional recycling networks. The networks could purchase spent batteries from consumers or accept older batteries as trade-ins for new units.

China has been promoting new-energy vehicles since 2009 and overtook the U.S. and Europe as the world’s largest market in 2016. About 777,000 electric vehicles were sold in the country last year, up 53% from a year earlier, according to the China Association of Automobile Manufacturers.

Beijing’s ambitious target of having 5 million such vehicles on the road by 2020 has created a rush of firms trying to enter the NEV sector, including around 20 startups launched since 2014.

The rapid development of the NEV sector has created a major public health risk from worn-out vehicle batteries, which contain toxic heavy metals such as nickel and cobalt.

In addition to recycling the components of exhausted NEV batteries, batteries could be reused for other purposes, some industry watchers say.

“For the automotive sector, when a battery is no longer performing in terms of capacity, I have seen examples in some countries where those batteries are used for energy storage in a home. That would extend the life of the battery and would get more energy out of the battery,” said Jeff Turner, vice president of sustainability at DSM, a Netherlands-based company active in the fields of nutrition, health and sustainable living.

In February, the ministry published draft rules to develop a “traceable system” to follow batteries throughout their useful lives. Under the system, manufacturers give each battery a code, allowing carmakers to keep track of them when a vehicle is sold.