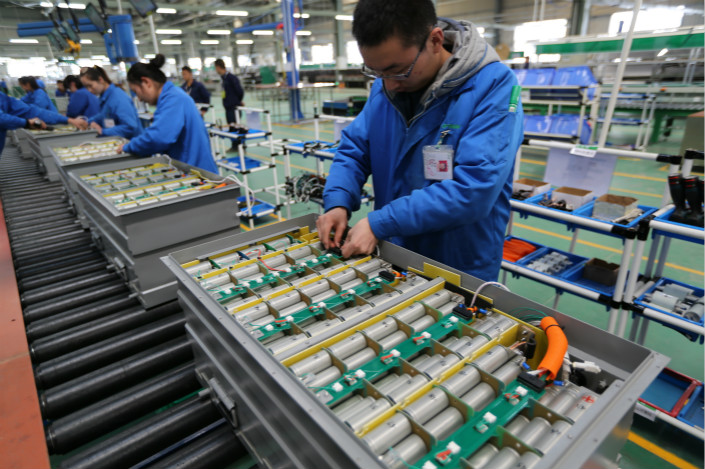 A new-energy car battery pack is assembled at the the OptimumNano Energy Co. Ltd. plant in Shiyan, Hubei province, in March 2017. New guidelines to take effect in August say new-energy car producers and their sales units must set up “recycling service networks,” where spent batteries will either be repaired for reuse or properly disposed of. Photo: VCG

China is placing responsibility for properly recycling vehicle batteries on new-energy carmakers — an effort to prevent environmental pollution in the emerging sector.

The new guidelines, which will take effect in August, also include rules for related industry players such as battery producers.

The guidelines — which were jointly issued Monday by the Ministry of Industry and Information Technology and six other agencies — said new-energy car producers and their sales units must set up “recycling service networks,” where spent batteries will either be repaired for reuse or properly disposed of.

The policy will employ a “traceable system” in which battery producers give each battery a code, which carmakers log when a vehicle is sold, as part of routine customer information.

Carmakers should also provide incentives to encourage customers to participate in the recycling process, such as repurchase or trade-in discounts and subsidies, the guidelines said.

Battery producers, meanwhile, should coordinate on battery design, to facilitate easy and efficient recycling, including sharing with carmakers expertise about proper disposal and preservation of batteries, the guidelines added.

China has been promoting new-energy vehicles since 2009, mainly through subsidies at both central and local government levels.

Those efforts have helped make China the world’s largest market for such vehicles, with 1.8 million units having been sold by the end of last year. But this rapid development has meant that a large amount of potential waste has been produced, as batteries used for electric cars in earlier years are set to be retired.

The batteries often contain toxic heavy metals such as nickel and cobalt, which can pollute the environment and pose danger to public health, according to Liu Renqiang, a senior technician at the China Automotive Technology and Research Center Co. Ltd., a government research group.