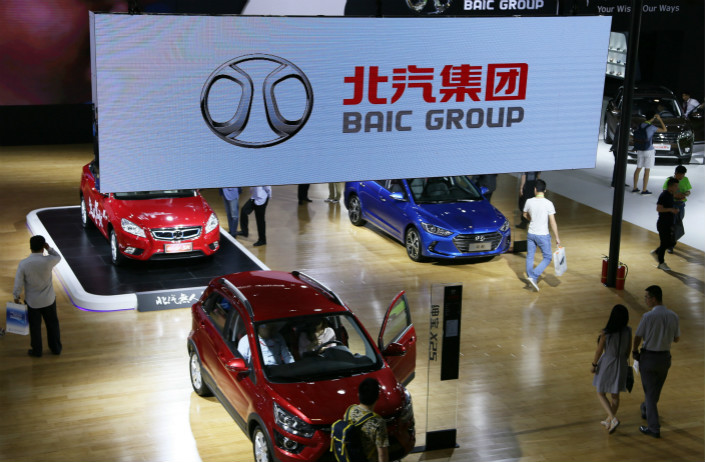 BAIC Motor Corp. displays its automobile models at the Beijing Science and Technology Industry Expo in May 2016. A new factory that BAIC and Daimler AG will build in China will manufacture luxury Mercedes-Benz cars, including new-energy vehicles. Photo: VCG

Daimler AG and its Chinese partner, BAIC Motor Corp., plan to invest nearly $2 billion to set up a factory in China, deepening the German automaker’s footprint in the world’s largest auto market.

The pair will invest more than 11.9 billion yuan ($1.9 billion) in a factory for their joint venture, Beijing Benz Automotive Co. The facility will manufacture luxury Mercedes-Benz cars, including new-energy vehicles, BAIC Motor said in a filing to the Hong Kong Stock Exchange on Sunday.

Daimler has recently been on a drive to ramp up development of new-energy vehicles to meet China’s strict sales quotas, which are set to take effect next year. The quota system will require new-energy vehicles to account for a certain percentage of all automakers’ sales, with the amount set to increase in 2020.

In addition to the BAIC tie-up, Daimler also has agreed to develop new-energy vehicles with Shenzhen-based BYD Co. Ltd. The German automaker’s BAIC alliance is more focused on pure electric vehicles, while its work with BYD is more focused on plug-in hybrids.

China has become one of Daimler’s most important markets. It sold 610,000 vehicles last year, of which more than 70% came from the joint venture Beijing Benz Automotive.

At the same time, Beijing Benz Automotive — which is controlled by BAIC — also made up a large share of the Chinese automaker’s business. BAIC Motor has estimated it will earn a profit of 2.23 billion yuan in 2017, largely from the sales of the joint-venture brand, excluding losses by its domestic brands such as Beijing Hyundai.