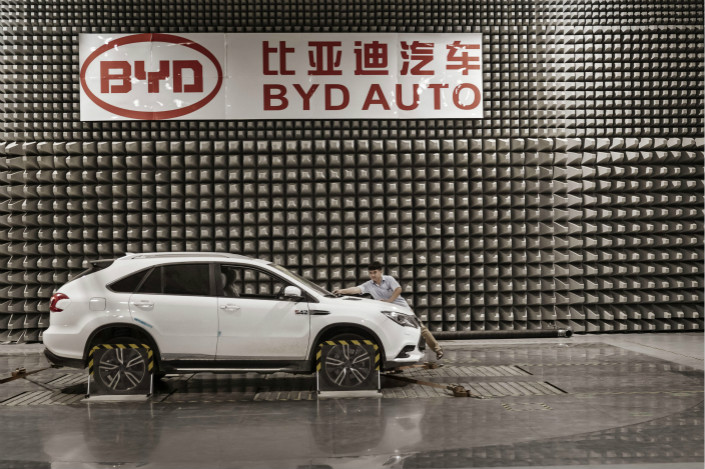 A vehicle is prepared for electro-magnetic interference testing at a lab in BYD's Shenzhen headquarters on Sept. 21. BYD accounted for 16% of the total 700,000 NEV units sold in China in 2017, according to the China Passenger Car Association. Photo: VCG

Automaker BYD’s new-energy vehicle sales in January fell far short of expectations, despite Beijing’s efforts to promote the clean technology, according to new data published by the company.

BYD Co. Ltd. sold 42,338 vehicles last month, including 35,000 traditional internal combustion engine cars. Only 7,330 of the sales were of new-energy vehicles (NEV), the automaker said on Wednesday. The figures marked the first time BYD specified NEV sales in its monthly total, as it aims to have such cars play a bigger role in its business.

That nearly 5-to-1 ratio for gas versus NEV sales was far higher than the two-to-one target that BYD has set as its 2018 goal, which includes pure electric, hybrid and vehicles using hydrogen fuel cell technology.

China has been aggressively promoting NEVs in a bid to foster the development of advanced technologies that can be exported, and also to clean up the country’s polluted air. But the technologies have been slow to catch on due to issues like changing government incentive plans and a lack of infrastructure, even though Beijing has pledged to eliminate all traditional gas-powered cars by an unspecified date.

Shenzhen-based BYD began as a rechargeable-battery producer in the late 1990s, and later used that as the basis to become the country’s leading NEV-maker, while also moving into traditional gasoline-powered models.

The company accounted for 16% of the total 700,000 NEV units sold in China in 2017, followed by BAIC Group’s Beijing Electric Vehicle Co. Ltd. (BJEV) unit, which sold 104,500 units, according to the China Passenger Car Association.

Beijing has tried using subsidies to promote such car sales, though those are reportedly set for reduction from this year and to get totally phased out by 2020. That could further challenge companies like BYD. In place of subsidies, Beijing rolled out a quota plan last September that will require all automakers to notch a certain percentage of their sales as NEVs starting next year, with the amount to grow in 2020.

Both foreign and domestic automakers, including Volkswagen AG, Ford Motor Co. Ltd. and Geely Holding Group Co. Ltd., have ramped up efforts to meet the mandate by either increasing their own investments in the space or forming joint ventures.