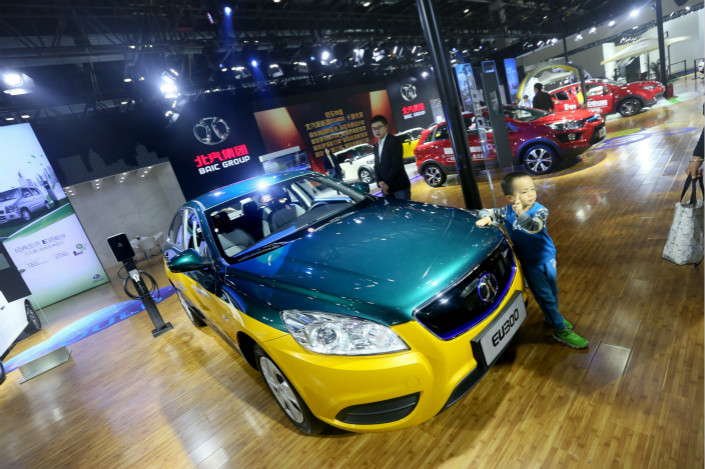 Daimler agreed to invest in BAIC BJEV under a strategic framework agreement first reached in June. It bought 208 million shares of the unit in September for 3.05 yuan apiece, giving the deal a total value of about 6.3 billion yuan ($1.0 billion). The National Development and Reform Commission (NDRC), China’s state planner that must approve all such major investments, recently gave its final blessing to the deal, it said in a Wednesday statement on its website.

BAIC is in the process of using a money-losing shell company to make a backdoor listing for the electric vehicle unit on the Shanghai Stock Exchange. Once that is complete, Daimler will hold about 30 million shares, or about 3%, in the listed company.

Foreign automakers like Daimler are rushing to build up their new-energy carmaking capacity in China following Beijing’s rollout of a quota system aimed at promoting cleaner-burning vehicles. That system will require all automakers to notch a certain percentage of their sales as new-energy vehicles starting next year, with the amount to grow in 2020. Companies that beat their sales quota, which relies on a point system, can sell their excess points to companies that fail to meet their quotas.

Other foreign companies that have set up similar new-energy vehicle joint ventures with Chinese partners include Volkswagen, Ford and the Renault-Nissan alliance.

On signing its original framework agreement last year, Daimler and BAIC said they will spend 5 billion yuan to produce electric vehicles under the German company’s Mercedes-Benz brand. That agreement included plans for a battery plant used for such cars, which will become part of a larger global network of such plants being built by Daimler. In August, BAIC BJEV separately raised 11.1 billion yuan in new funds, with an eye on an eventual separate listing for the company.