In Depth: Newcomer Surges to Top of Electric-Vehicle Battery Market 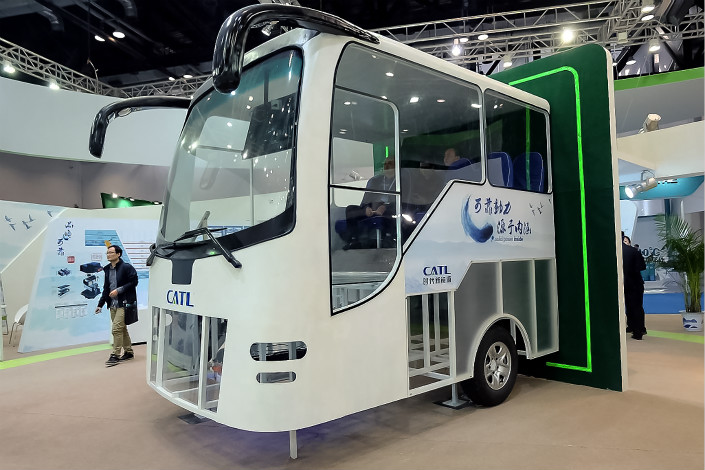 Battery-maker CATL hosts a booth in the southern city of Shenzhen on Nov. 12. Photo: VCG

* Fujian-based CATL has managed to pull ahead of other big players in the electric-vehicle battery industry over the last four years.

* However, the battery-maker faces uncertainties once the Chinese government phases out subsidies and other preferential policies for electric vehicles by the end of the decade

(Beijing) — It took only four years for Contemporary Amperex Technology Co. Ltd. (CATL), previously a little-known business in Ningde, Fujian province, to seize the crown as the world’s top maker of batteries for electric vehicles.

The company leaped ahead of more-established and formidable domestic players such as BYD Auto Co. Ltd., as well as big names from overseas, including LG Chem Ltd., Samsung SDI Co. Ltd. and Panasonic Corp.

The company recently gained attention for becoming one of the first to get fast-track approval to float shares in Shenzhen.

But industry watchers have a warning for the up-and-comer: Be prepared for a tougher business environment by 2020, when Beijing will have ended its policies that have given a boost to the electric-vehicle industry.

In April, the securities regulator approved the $2 billion initial public offering (IPO) application of CATL, less than a month after the company updated its prospectus. Chinese authorities have been encouraging new listings by “unicorn” companies — startups valued at more than $1 billion. In the past, most have had to wait one to two years for approval after submitting their IPO applications.

A person close to CATL told Caixin that the lithium-ion battery supplier plans to debut in the middle of this year. “It seems that the listing will come sooner based on the current pace,” the source said.

According to CATL’s prospectus, it plans to issue 217 million shares to raise as much as 13.1 billion yuan ($2.06 billion) at China’s Nasdaq-style ChiNext board in Shenzhen. The IPO would value the company at $20 billion, making it the largest company on the ChiNext.

CATL plans to use the money to build a battery plant that would be second in size only to Tesla Inc.’s Gigafactory in the U.S. state of Nevada. The Gigafactory is expected to employ up to

10,000 people and have an annual production capacity of 150 gigawatt-hours (GWh) when it is fully operational by 2020.

CATL currently operates three manufacturing facilities in China — Jiangsu, Qinghai and Foshan — according to its website.

The battery supplier started as a spinoff of Amperex Technology Ltd. (ATL) in December 2011. Owned by Japan’s electric materials supplier TDK Corp., ATL was set up in 1999 to produce lithium-ion batteries for mobile devices, including tablets, notebooks and smartphones.

CATL became an independent company in 2015, with ATL holding no stake and the two companies currently retaining only a strategic partnership.

The Ningde-based supplier got its first break by winning a project the same year to make battery packs for the first electric-vehicle model from BMW Brilliance Automotive Ltd. — a joint venture between BMW Group and Brilliance China Automotive Holdings Ltd.

A person familiar with BMW Brillance’s development told Caixin that CATL was selected because ATL is a major supplier to Apple Inc., Samsung SDI and Huawei Technologies Co. Ltd. However, CATL was capable of producing only battery cells, lacking the know-how to make whole battery packs, which also include battery materials, battery casings and energy management systems.

That’s when BMW Brillance decided to transfer its battery-pack know-how to CATL, and the rest is history.

CATL became a powerhouse by taking the No. 1 battery-maker spot for the first time last year. It unseated long-established rivals including LG Chem, BYD and Samsung SDI.

According to Shenzhen Gaogong Industry Research, CATL last year churned out 11.8 GWh in battery capacity, a surge of over 74% from 2016.

Japan’s Panasonic was second-largest with 10 GWh, and BYD came in third with 7.2 GWh. Another China-based maker, OptimumNano Energy Co. Ltd., and South Korea’s LG Chem were No. 4 and No. 5, producing 5.5 GWh and 4.5 GWh respectively.

In addition to its fast-track IPO that stirred market interest, CATL was blessed with a slew of other good news this year. In early March, German automaker Volkswagen Group handpicked CATL to supply batteries for its new electric-vehicle project.

CATL has just bought a controlling stake in North American Lithium Inc. — an industrial-minerals mining company in the Canadian province of Quebec — to expand its access to raw material supplies. The mine is expected to produce 23,000 tons of battery-grade lithium carbonate every year.

But analysts say the good days may be numbered.

“CATL has three more years to prepare itself for tougher challenges from its Japanese and South Korean rivals before the government withdraws its generous subsidies,” an analyst told Caixin.

The Chinese electric-vehicle supply chain, including automakers, battery producers and component-makers, has taken advantage of favorable policies dished out by Beijing, which have offered a slew of incentives to promote growth of the industry as early in 2010.

A notable sweetener was a rebate of as much as 110,000 yuan per vehicle for people purchasing long-range electric vehicles.

The all-out effort made China the world’s largest electric vehicle market in 2016, overtaking the U.S. and Europe. About 777,000 electric vehicles were sold last year, 53% more than that of 2016, according to the China Association of Automobile Manufacturers.

By the end of 2017, China had an estimated 1.8 million-plus electric vehicles cruising the streets across the country. Beijing has set an ambitious target of having 5 million such vehicles on the road by 2020.

However, the rebate program has led to some automakers falsifying sale numbers to enjoy greater subsidies. Beijing therefore reduced the rebate for long-range electric vehicles by 20% in 2017, and said it will gradually phase out all subsidies by 2020.

Analysts said CATL soon has to stand on its own footing without the government’s safety net.

Already, Panasonic and LG Chem are ready to make a comeback.

In March, the Japanese firm said its facilities in Dalian have started mass production of battery packs for the Chinese and North American markets. LG Chem is expanding its factories in Nanjing by adding two battery facilities, according to South Korean media reports.