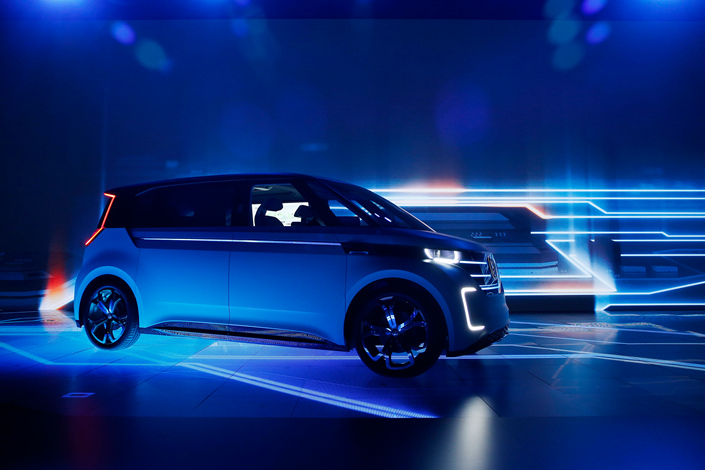 Volkswagen plans to spend more than $60 billion on battery cells. Above: Volkswagen unveils its BUDD-e electric car in 2016 in the U.S. Photo: IC

Volkswagen Group China’s public relations department confirmed the decision to Caixin on Wednesday. The German auto giant said it will add other battery suppliers for its ambitious EV plan in the future.

Volkswagen’s first pure electric model equipped with CATL batteries will hit market this year. The partnership is part of Volkswagen’s plan to launch 80 new electric car models by 2025 and offer a hybrid or all-electric version of all 300 models it produces by 2030.

The German automaker, trying to move beyond its diesel emissions-test scandal, has said it plans to spend more than 50 billion euros ($60 billion) on battery cells.

CATL, based in Ningde, a third-tier city in China’s southeast province of Fujian, is already partnering with German automakers BMW and Daimler, the maker of Mercedes-Benz. Mercedes-Benz last year announced CATL had been chosen as one of its electric-vehicle battery suppliers.

CATL is also close to picking one of three sites in the European Union for its first overseas plant, which will help it supply European carmakers like BMW and Mercedes.

CATL is considering Germany, Poland and Hungary for its new Europe base, according to Bloomberg. CATL Chairman Zeng Yuqun said this week that a decision is imminent.

CATL is planning a 13.1 billion yuan ($1.97 billion) initial public offering (IPO) on China’s Nasdaq-style ChiNext board, using the funds to build a battery-cell plant second in size only to Tesla Inc.’s Gigafactory in Nevada.

The IPO would value the company at $20 billion, making CATL the largest company on the ChiNext board.

In its prospectus, CATL said its net profit was 1.86 billion yuan in the first half of 2017.

The company will open a sales office in Japan in May, Liang Chengdu, dean of CATL Research Institute, said last week in Tokyo.

Japanese carmakers including Toyota Motor Corp., Nissan Motor Co. and Honda Motor Co. have all said they are considering CATL batteries for their local EVs in China, Bloomberg reported.

Chinese battery-makers have been winning market share from South Korean and Japanese players in recent years. They got a boost in July 2016 when the Chinese government started excluding foreign players from a list of licensed battery suppliers from which automakers must choose to qualify for new-energy subsidy programs.

The subsidies are part of a government drive to control carbon emissions and clean up the nation’s polluted air.