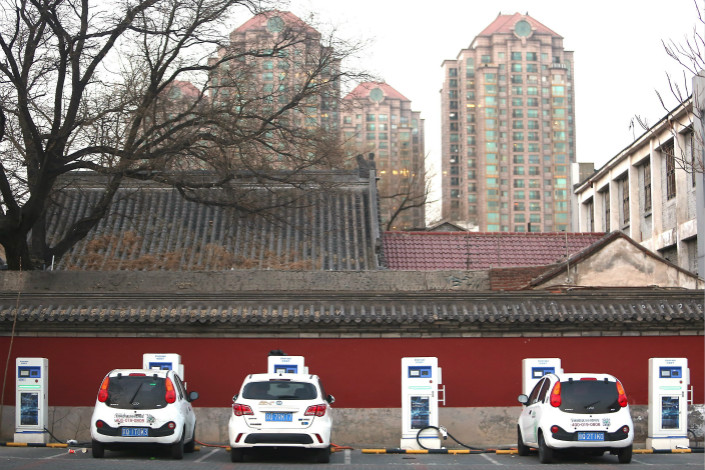 Shared electric vehicles charge next to a Beijing temple on Jan. 16. “Nationwide, the average usage rate for electric chargers is 15%,” said Xu Yanhua, chairman of the Charging Infrastructure Alliance, a government think tank. That would mean a charger was being utilized for only 15% of a given 24-hour period. Photo: Visual China

Driven by years of government subsidies, China has become the world’s largest market for electric vehicles (EVs). But a lack of infrastructure and the inefficiency of the existing network of charging stations could hinder further development of the emerging sector.

In 2015, economic planners rolled out a proposal to install a total of 4.8 million EV charging ports, known as “piles,” across China by 2020, when it was expected that the country would have around 5 million EVs on its roads.

But despite government support, only 213,000 such stations had been built by the end of 2017, according to the China Association of Automobile Manufacturers, a leading industry group.

With current technology, it takes hours to completely charge a depleted EV battery at most public charging piles. In many markets around the world — especially in the United States — drivers often live in stand-alone homes, often with garages, and charge their vehicles at the end of the day from their residences.

Under Beijing’s 2015 plan, 4.3 million of the proposed 4.8 million chargers would be for personal use — one charging pile per car. But in China’s major cities, private parking lots with dedicated parking spots are rare. As a result, shared public charging stations inside residential communities would better suit Chinese drivers.

Even after navigating the logistics of installing the piles, investors are facing lack of demand — in part due to the chargers being in low-traffic areas. Because of an untenable cost-profit ratio, Rong and his company have decided to cease investing in stations in Shenzhen’s housing communities.

To see a return on investment within one year on a station that cost 10,000 yuan ($1,560), usage must exceed 4 hours per day — a threshold most chargers in the southern city’s communities fail to reach, according to Xie Pan, director of a property management company.

“Nationwide, the average usage rate for electric chargers is 15%,” said Xu Yanhua, chairman of the Charging Infrastructure Alliance, a government think tank. That would mean a charger was being utilized for only 15% of a given 24-hour period.

After grappling with these obstacles in the private market, some investors have begun switching to the public transportation and shared-car markets, seeking a more stable source of demand. But cost-profit ratios there have also been unattractive to suppliers, especially grid builders.

Another risk for investors is the evolving technology in the sector. Some industry executives said China’s current infrastructure — which consists mainly of slower-speed chargers that can take 6 to 8 hours to completely charge a depleted battery — could soon be obsolete.

“Many of the electric chargers built in the early stages were shoddy ‘image projects’ to meet the central government’s goal,” one investor told Caixin.

Some companies, like Jiangsu province-based Wanbang, are considering investing in more rapid-charging piles — which could mean that Beijing’s current strategy to install millions of chargers may be unnecessary.

The industry is also looking at the so-called battery swap model, in which drivers pull up to a station and simply exchange their depleted battery for a fully charged one — a process that takes mere minutes.