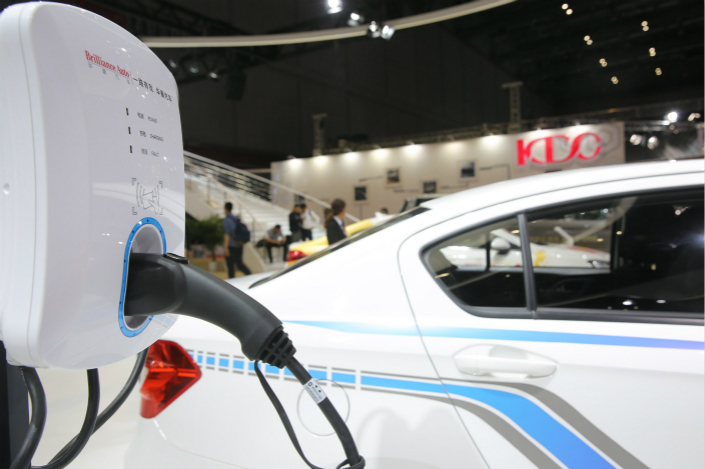 It was something of a shock to the auto world when China announced that it will join the U.K. and France in totally banning the sale of internal combustion vehicles.

Although no specific date for the ban has been announced, this long-term commitment set the general tone for the future of automakers who want to sell cars in the world’s biggest vehicle market.

Sales in China of new-energy vehicles (NEVs) — a category that includes hybrid cars as well as those powered exclusively by batteries or hydrogen fuel cells — have risen from around 8,000 units in 2011 to more than 500,000 last year, 40% of global output, according to the China Association of Automobile Manufacturers.

This huge increase has been driven by a series of national policies to charge up this fledgling market.

How will subsidies change?

Beijing’s subsidization of NEVs began in 2010, when Beijing identified the sector as one in which the country could leapfrog its foreign rivals and perhaps come to dominate.

What came along with the subsidies was an exponential growth in sales.

However, the sheer number of manufacturers — including those without the relevant qualifications — rushing into the sector meant that there may be too many electric cars now being produced. The Chinese authorities said they have started an investigation into overcapacity in the sector.

Generous, years-long subsidies have placed a massive financial burden on the government with one expert estimating in 2015 that the program will cost central and local governments more than 400 billion yuan ($60.4 billion) — more than Luxembourg’s gross domestic product in 2016 — during the five years through 2020.

With the downsides of state handouts, which have also led to widespread fraud, becoming apparent, China announced that it will completely phase out the subsidies by 2020. Caixin has learned that the phasing-out process will accelerate. Beijing intends to slash subsidies by 20% from next year, instead of as in 2019 as originally planned.

What is the future of state support for NEVs?

To replace the subsidies, the government plans to roll out a quota program. This means that the burden of supporting NEV development will be borne instead by carmakers, who will have to ensure that a certain ratio of sales come from low- and zero-emission vehicles.

When the program, which went through a one-year public consultation, was formalized in September, some companies were relieved to find out that they had an extra year to prepare.

Under the latest cap-and-trade program policy, automakers must obtain a certain amount of credits — which are related to the various types of NEVs — in 2019, instead of in 2018, as previously planned. This amount will rise by a fifth in 2020.

This amount of credits could amount to 4-5% of actual vehicle sales for most foreign automakers, according to analysts.

How has the industry reacted to the quota program so far?

When the draft plan came out last year, German manufacturers expressed concerns that the rigid quota system will leave them lagging behind their Japanese and American counterparts, who have an edge in low-emissions vehicle technology.

In a proactive measure to meet Beijing’s demands, Volkswagen in May announced that it will establish its first first-ever wholly-electric car joint venture with Chinese partner JAC Motors, dedicated to producing electric vehicles in the country.

Others have since announced similar plans, including American’s General Motors and Ford, and French and Japanese alliance Renaut-Nissan.

Still, some foreign brands are concerned that Beijing may be pushing the electrification revolution too fast and too aggressively.

Jochem Heizmann, CEO and president of Volkswagen Group China, has called for Beijing to refrain from setting stricter quota standards in the years after 2020, as targets for subsequent years have yet to be issued under the current policy framework. He said that market forces should have a say in consumer product choices.

What about the new electric car permit?

Beijing started issuing permits that allow companies to produce only electric vehicles in bid to foster competition in the predominantly state-owned auto industry in June 2015.

Compared with getting a license to produce traditional cars, acquiring one of the permits requires firms to meet less-strict standards and jump lower technological hurdles.

Many companies have rushed to grab such permits, with 15 companies obtaining such licenses from the government, including Volkswagen’s joint venture with JAC.

But Beijing cancelled the initiative in June due to concerns that allowing so many companies to enter the market may create a glut, leaving at least 20 companies who have filed applications high and dry.

To avoid being elbowed out of the increasingly competitive market, smaller players have begun to partner with larger companies. For example, internet entrepreneur William Li’s electric car company NIO has announced a partnership with JAC.

Will foreign ownership restrictions be lifted?

China has long banned foreigners from owning more than 50% of any automaking venture with a Chinese partner. But by June 2018, the current limit will be eased as long as automakers are producing new-energy cars in free trade zones, according to the Foreign Ministry.

In addition, Beijing has relaxed its rules and allowed foreign carmakers to form a third China joint venture if that venture makes NEVs. Previously, all foreign firms were limited to just two auto joint ventures.