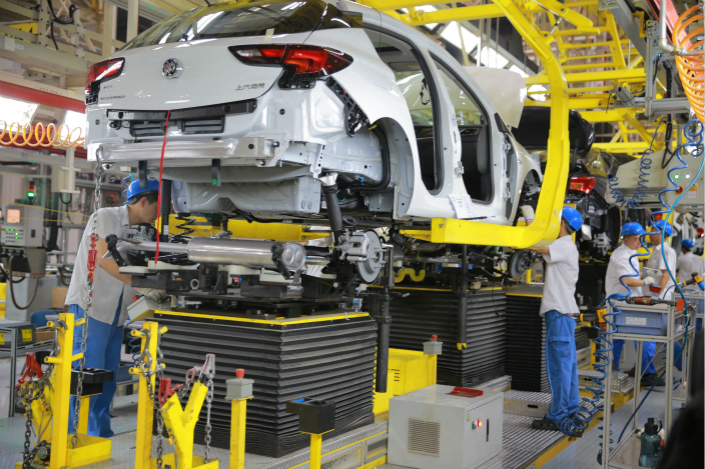 In September, U.S. automaker General Motors said nearly all models of its global brands in China will offer some kind of electric motor, either hybrid or fully electric, by 2025. Above, workers assemble vehicles at a General Motors factory in Liaoning province in August 2016. Photo: Visual China

Foreign automakers have responded positively toward China’s new-energy vehicle push, but some are concerned that Beijing’s plan could be moving too fast and too aggressively.

It would be better if the Chinese government could slow down a bit before setting even higher standards after 2020, said Jochem Heizmann, CEO and president of Volkswagen Group China.

Under new emissions rules announced in September, Beijing has set specific targets for all foreign and domestic automakers in the country, requiring that a certain percentage of cars they produce — 10% for 2019 and 12% for 2020 — be either electric or hybrid.

Targets for subsequent years have yet to be issued.

Heizmann called on China to refrain from setting stricter quota standards after 2020. He said that the market forces should have a say in consumer product choices.

It will still take time before consumers can fully accept electric cars, he told reporters in Guangzhou on Thursday.

China’s electric vehicle industry has developed rapidly over the last few years thanks to a series of government incentives, including subsidies. China is now the world’s largest electric car market with more than 500,000 units sold last year, nearly half of global production.

But the subsidies are being phased out over the next few years, and Heizmann said that cost is the biggest issue for his company.

Automakers in China still can’t make a profit without subsidies, according to Shi Hong, vice president of SAIC General Motors Corp. Ltd. That is mainly because of the high costs of batteries, which are a key component of electric vehicles, he said.

Regardless, foreign automakers — including Volkswagen and General Motors — have wasted no time racing to meet Beijing’s policy demands.

Volkswagen plans to invest more than $12 billion with its Chinese partners to introduce 40 locally produced vehicles in China by 2025, the company said on Thursday.

Volkswagen is expected to pay $60 billion to battery suppliers to power its electric-vehicle push. Chinese battery-maker Contemporary Amperex Technology Co. Ltd. is one of the leading candidates for such supply deals.

In September, General Motors said nearly all models from its global brands in China would offer some kind of electric motor, either hybrid or fully electric, by 2025.