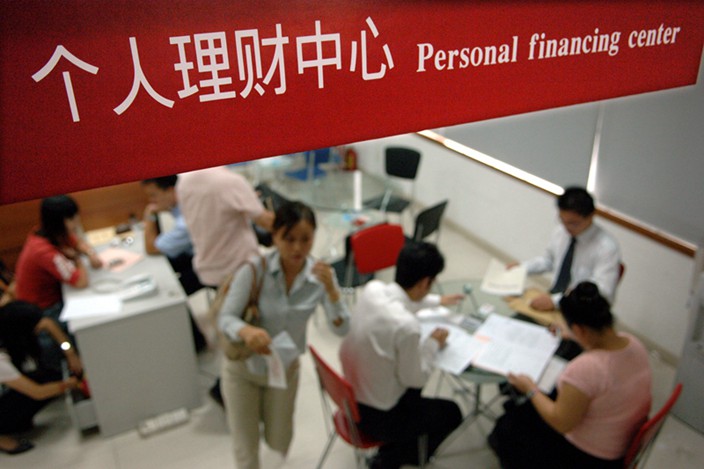 One banking source told Caixin that the start-stop approach to regulating wealth management products may end up to doing more harm than good. Photo: VCG

China’s commercial banks have been in a celebratory mood.

After pushing back against new regulations in April that tightened up restrictions on the country’s underregulated asset management industry, the lenders have since been given more leeway and a longer grace period to adapt to the rules.

You can almost hear the collective sigh of relief. But that sigh has been accompanied by an increase in same kinds of investment products that alarmed regulators to begin with.

The newly lightened mood of Chinese bankers marks a reversal from the complaints and resistance that came in the wake of April’s regulations. The change came in July, when the country’s financial regulators, facing market turmoil and liquidity pressure in the private sector, issued a notice that made it easier for banks to implement the tough new rules. Just two months after that, regulators further relaxed the rules covering banks’ investments in stocks and high-risk, high-yield projects with supplementary rules on wealth management products (WMPs).

“The sweeping asset management rules rolled out in April hugely impacted the industry,” Liu Xinghua, chief of the asset management department chief at China Construction Bank, the country’s second-largest lender, said at a forum in mid-October. “But we are now fortunate to have the July notice, which allows us more flexibility for implementation. That really brought our business back to life.”

Chinese banks, also the country’s most profitable companies, have issued nearly 30 trillion yuan ($4.3 trillion) in asset management products over the past decade, pouring much of that money into the mammoth, opaque and underregulated “shadow banking” sector. In most cases, those channeled funds, which are prone to leverage and liquidity risks, managed to circumvent regulatory requirements.

Financial regulators have made clear their determination to get the sector in line. Since early 2017, they have rolled out a series of regulations, tackling the shady practices as a part of a broader deleveraging campaign.

The crackdown peaked on April 27 when the central bank, the banking and insurance regulator, the securities watchdog, and the State Administration of Foreign Exchange issued the long-awaited unified “Guidelines on Standardizing Asset Management Businesses of Financial Institutions,” seeking to break the implicit guarantee of WMP repayment that had fueled risk-taking and built a culture of complacency and expectations among investors that they would be bailed out if worst came to worst. In a concessionary move, policymakers extended the deadline for implementation from mid-2019 to the end of 2020.

The firm stance to clean up the asset management industry was maintained through the first half of 2018, and led to the significant scaling back of banks’ new offerings of WMPs and increasing fundraising activities through other means such as structured deposits.

However, in a July 20 notice issued by the China Banking and Insurance Regulatory Commission (CBIRC), the regulator surprisingly relaxed the rules’ implementation.

In the notice, the regulator called for banks to adapt to the new rules at a “measured pace” they would set by themselves within the previously announced grace period that runs through 2020, which placed less pressure on banks to liquidate those products that run afoul of new regulations. The definition of products deemed compliant with the new rules has been widened, while noncompliant products are also allowed to roll over within the grace period, compared to a previous strict liquidation requirement that would have required banks to rid themselves of all noncompliant products by 2020.

Since regulators relaxed the requirements, the number of WMPs that don’t offer guaranteed repayment of principal plus interest — a guarantee which fueled the shadow banking sector — rebounded to 22.32 trillion yuan as of the end of August. That figure was up 1.32 trillion yuan from June 30.

“The rebound was mainly triggered by the notice,” according to a bank’s asset management department head. “Otherwise, the number should have continued to decline. But now it has not only stopped declining, but has instead grown relatively fast amid the current liquidity environment.”

The relaxation was largely leveraged by banks as a guarantee to slow down their pace of WMP reform, and a sign that there will be further easing of restrictions when the grace periods ends, Caixin has learned.

“The July notice was the fruit of the banks’ bargain with the regulators, and the market eventually had a winning hand,” an asset management department head of a joint-stock commercial bank told Caixin.

“We wrote reports frantically in the first half of this year to study the future of banks’ wealth management businesses. Now we don’t have to,” a manager of the asset management department of a large bank told Caixin.

To some veteran bankers who have been in the business for years, the relaxation is also a reasonable and satisfying outcome for banks and their clients in the real economy.

The relaxation was also a reflection of how hard it is for banks to find alternative businesses as profitable as selling WMPs. The April regulation requires banks to shift to a model of WMPs based on net asset value (NAV) from the current guaranteed or expected returns, and to publish a regular market-to-market NAV for every product. However, such attempts were frustrating for those who tested the market.

“We stopped issuing the WMPs that carry an implicit guarantee in April, and it devastated the size of our total outstanding WMPs” said Bu Yanhong, the head of the asset management department of the Postal Savings Bank of China, the lender boasting the largest branch network on the Chinese mainland. “From April 27 to September 30, the scale of our WMPs declined by 80 billion yuan, or a 10% decrease year-on-year. I have to say it remains difficult for us to educate our customers about NAV-based products.”

According to a report by online financial service platform Rong360.com, NAV-based products accounted for only 1.67% of total bank WMPs at the end of September. And even for that small amount, many still didn’t comply with accounting practices that measure the value of assets based on their most recent market prices.

Despite the difficulties ahead, though, advocates insist that the country’s asset management industry should be reformed, and bankers shouldn’t stay so comfortable.

TF Securities said banks are likely to continue issue non-NAV-based WMPs during the grace period by securing funding from the market. However, these WMPs have the same problem as previous WMPs — they promise investors steady returns with an implicit guarantee.

It may even run counter to the purpose of the April asset management regulation, which aims to improve investors’ awareness of the risks they bear and prepare them for shouldering potential losses, according to the brokerage.

“The reform to turn banks’ WMPs into NAV-based model ones should not be halted,” said Chen Kai, financial services partner at consultancy EY’s Greater China. “Otherwise, all talk will be empty.”

One banking source told Caixin that the start-stop approach to regulating WMPs may end up to doing more harm than good. “If the market comes to believe regulators will continue to postpone the deadline for new regulations and will always allow banks to keep rolling over noncompliant products, then it’s going to get really dangerous for the industry when the current grace period ends in in 2020,” the source said.