Threat of Clash Could Deter China From Skirting New U.S. Sanctions on Iran

By Ke Dawei and Jia Tianqiong 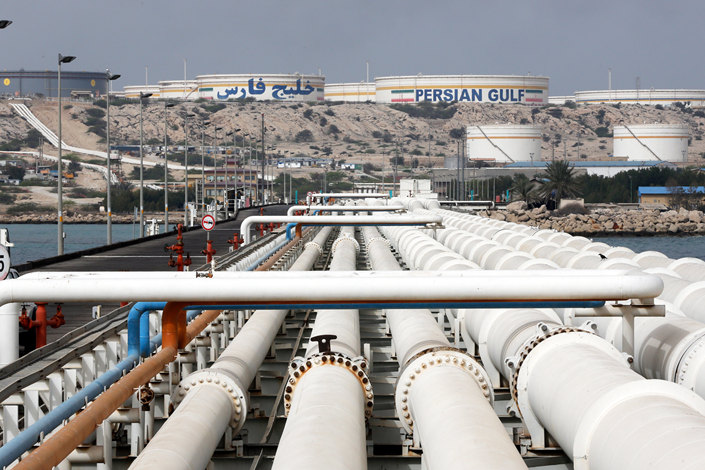 An oil terminal on Iran's Kharg Island in the Persian Gulf on March 12, 2017. Photo: IC

Despite dodging a bullet when it was temporarily exempted from renewed U.S. sanctions on Iranian oil importers, the desire to avoid future face-offs with Washington is likely to encourage Beijing to wean itself from Iran’s top foreign exchange earner.

U.S. Secretary of State Mike Pompeo announced the re-imposition of sanctions on Iran’s oil, banking and shipping sectors at a press briefing on Monday, in response to the current administration’s suspicions that the country is continuing its nuclear program with an ultimate aim of developing nuclear weapons.

However, China and seven other countries including India, Japan and South Korea will get temporary exemptions from the sanctions for the next six months, Pompeo said. U.S. President Donald Trump explained he was taking the step to avoid driving up global oil prices, and to avoid shocking the market, according to Reuters.

Anticipating the return of sanctions before the actual announcement, China’s foreign ministry spokeswoman Hua Chunying said China “regrets” the U.S. decision at a regular press briefing on Monday, saying that Iran has been making progress under the Joint Comprehensive Plan of Action, an international agreement intended to freeze the country’s nuclear program. She added that China and Iran will “conduct normal economic and trade cooperation under the framework of international law, which is reasonable and legal. This right should be respected and maintained.”

China received 24% of Iranian oil imports in 2017, according to the U.S. Energy Information Administration (EIA). Yet despite the defiant talk, China has substantially curtailed its Iranian crude oil intake in recent months, from a likely peak of 791,000 barrels per day in August down to an expected 580,000 in November, according to S&P Global Platts.

Similarly, China Petroleum & Chemical Corp. (Sinopec) said in its third quarter results briefing call last week that it is in talks with the government to find special arrangements for its Iranian crude oil imports, which are the largest of any company in China, according to S&P Global Platts.

It has also become more difficult for Chinese energy companies to do business with Iran. Bank of Kunlun Co., the main channel for settlements between China and Iran, announced that it would suspend its operations in Iran from November due to U.S. pressure. Bank of Kunlun is itself a unit of state-owned oil giant China National Petroleum Corp.

Despite being the biggest buyer of Iranian oil, China’s imports from the country have never reached the high levels commentators expected for a country of its size, according to analysis from the EIA. They attribute that fact to China’s ongoing commitment to diversify its energy sources.

The threat of sanctions has also been a boon to other oil producing nations, with China’s imports from Oman up 10% in September and increasing supply coming from Saudi Arabia and West Africa, according to Yan Hai, a transportation analyst with Shenwan Hongyuan Securities Co. Ltd.

However, traders involved in buying from Iran also told Caixin that Iranian oil may end up being pumped to the United Arab Emirates and Oman before transshipment to China, bypassing any future U.S. efforts to blockade Iranian oil boats. While this would bring up transit and re-export costs, the pipeline infrastructure is already well-developed across the region, meaning China’s reduction in Iranian imports may be smaller than it appears.